So I was poking around in the Maine Room of the Jesup Library, which is exactly what it sounds like – a tiny room off to one side of the main room in which they keep all the books about Maine, with one wall just for Bar Harbor and MDI. It has stuff like Ladies’ Fellowship cookbooks from local churches, and a tiny book about the gardens at the Jordan Pond House, and books about the Bio Lab and the Jackson Lab, and books like Lost Bar Harbor or Bar Harbor in the Gilded Age. Intensely local stuff, some of it. So I was poking around among the pamphlets, and I found this: 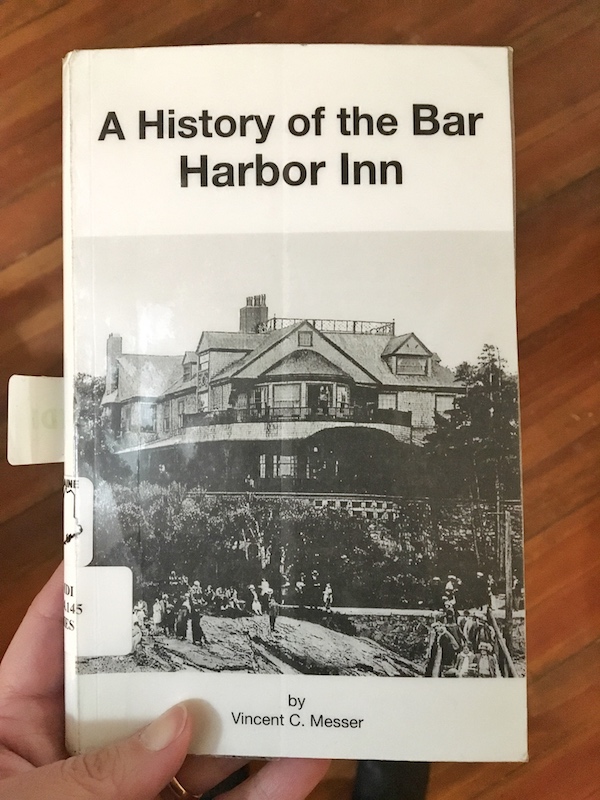 It’s actually awesome – at least half of it is a history of tourism on Mount Desert Island from the 1830s to the 1980s, and the author sets the development of the inn within the context of social change on the island. If you’re interested in the island’s history I highly recommend this one! It’s short and readable, too, with some great anecdotes.

If you can remember all the way back to Coast Walk 2, we talked a bit about the beginnings of the inn as a social club. Here is Messer’s account of the Reading Room’s grand opening in 1887: 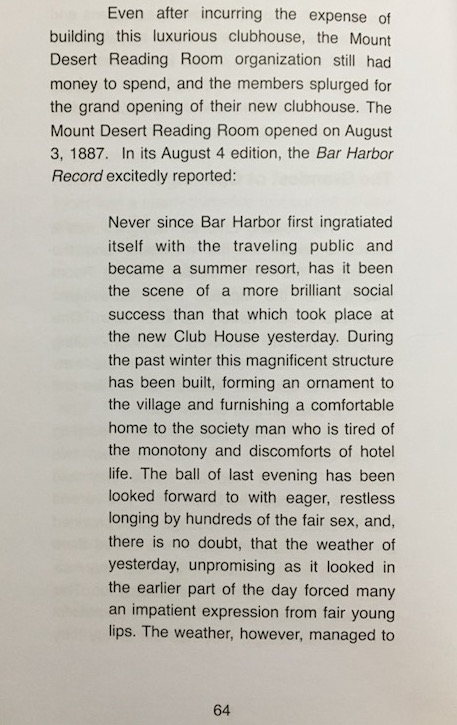 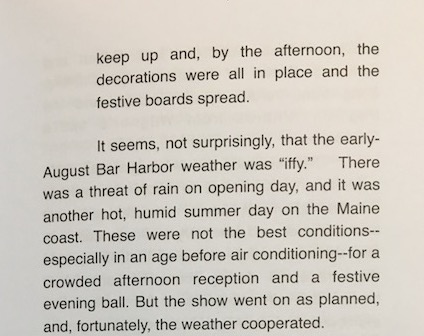 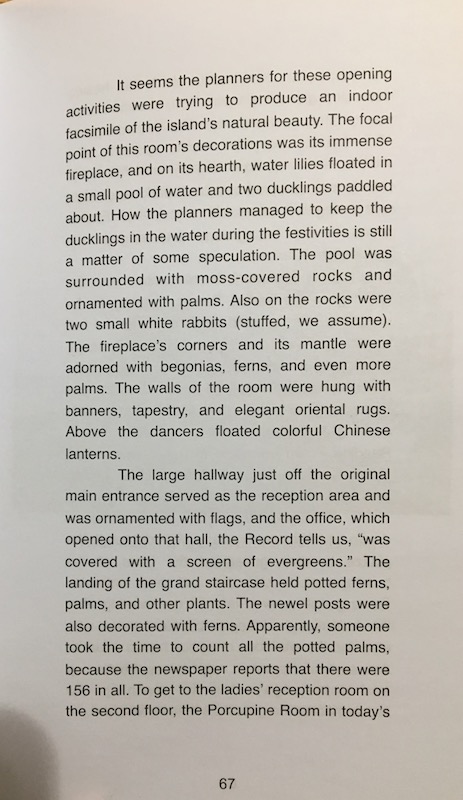 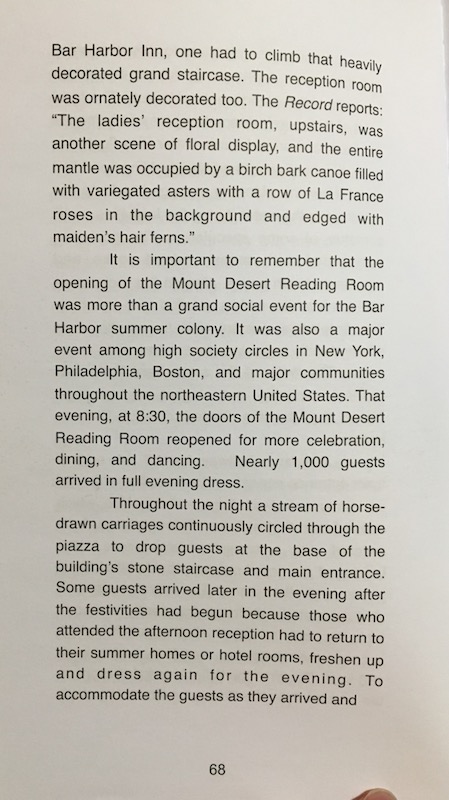 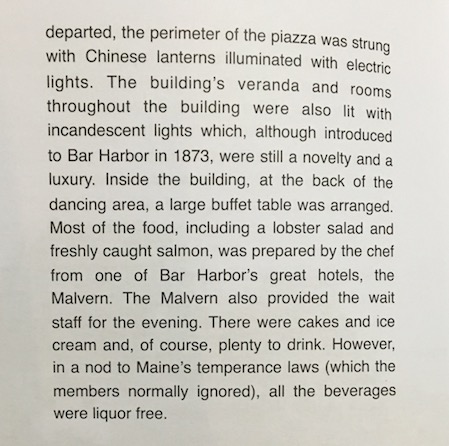 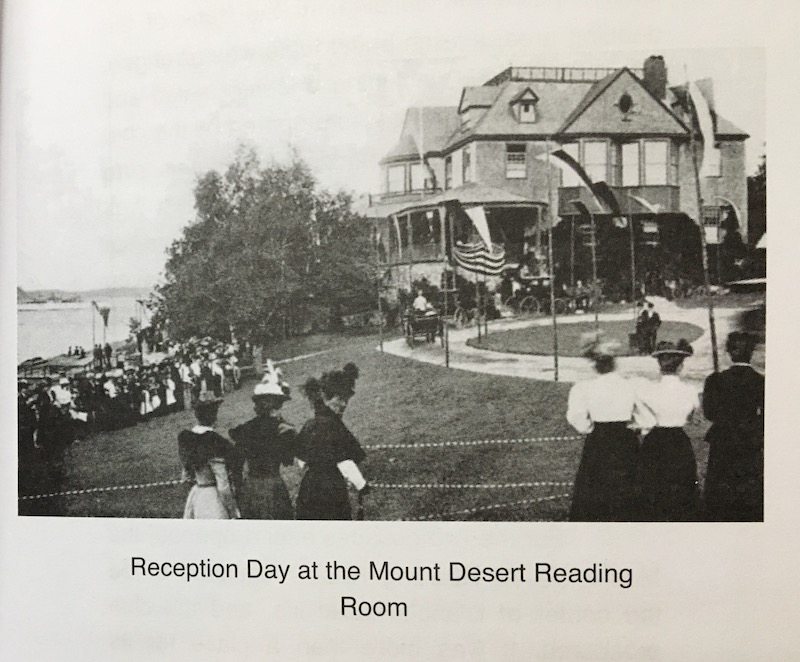 That was a little long, sorry. I’ll skim over the rest of its history – the Reading Room social club closed in 1921 after WWI devastated tourism and the new income tax cut severely into the summer visitors’ discretionary income. It was bought by the Maine Central Railroad in 1923 and leased to the Bar Harbor Yacht Club, which was very successful through the Roaring Twenties but closed in 1932 with the onset of the Great Depression. The following year, a consortium of hotel owners created the Shore Club in the building as an amenity for their guests. In the 1940s, when tourism dried up during WWII, the US Navy occupied the building, using it as a mess hall, communications, recreation, some housing, and office space. After the war, it was essentially abandoned and sat empty until the Fire of ’47, when the Red Cross used it as their disaster service headquarters: 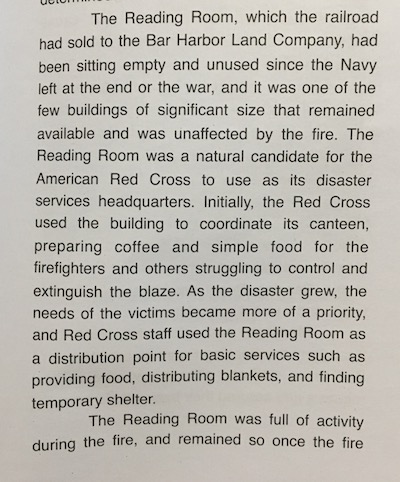 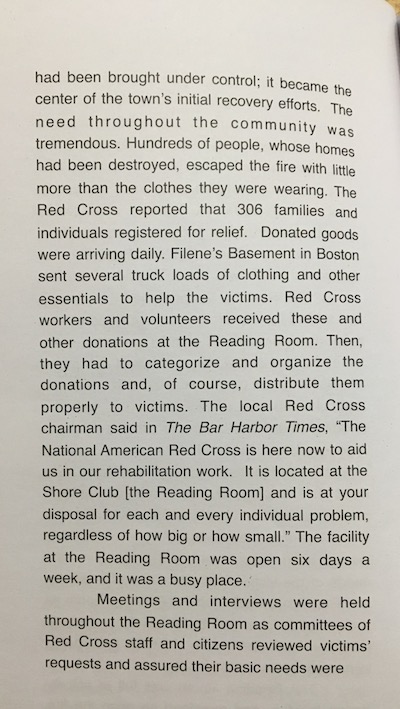 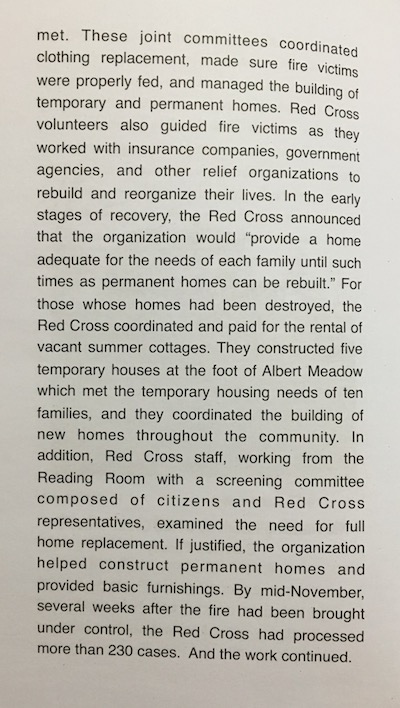 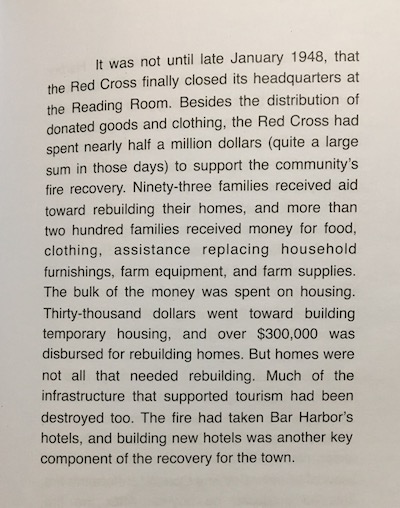 In 1948, some of the more determined rebuilders formed the Bar Harbor Hotel Corporation and bought the old Reading Room building. They “raised money by selling shares to island residents and other interested parties. … The plan was to modify the Reading Room building and add a wing of fifty rooms on the southern side of the building.” The new Hotel Bar Harbor opened in 1950. It prospered, was sold a couple of times, changed its name to the Bar Harbor Motor Inn, continued to prosper, and in 1987 was bought by David Witham, who changed the name to the Bar Harbor Inn.

And so it goes.

One thought on “Addenda: The Bar Harbor Inn (Coast Walk 2)”