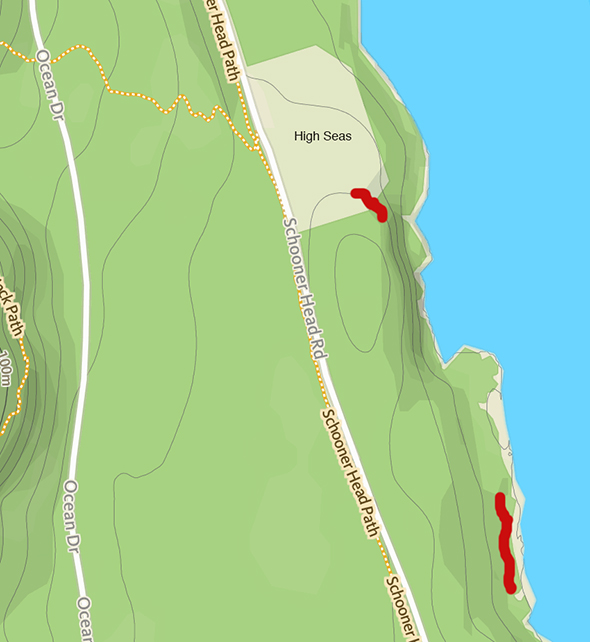 Well, I knew the weather would get the best of me at some point, but I have to admit, this is not how I expected it to win! I thought maybe a freezing rain or gale-force winds would keep me indoors, because we get a lot of both in the winter. Here on the coast, serious snow is rare, and a good winter is one where we get enough to cross-country ski on the carriage roads. Six inches, maybe a foot. This year is a record-breaker: a week of snowstorms left us with a good three feet of snow, with drifts up to six feet deep. My kids have had four snow days in two weeks, and our schools don’t close unless the weather’s bad.

All of which meant that when Brenda and I set out from High Seas we found the going very slow. The snow was so light and powdery that even with snowshoes Brenda sank in up to her shins with each step; without snowshoes, I frequently went in over my knees. It was pretty obvious that we were not going to be able to do the mile or so of hiking that I had scheduled.

We had also planned to take this blog into more serious territory than my usual posts: our destination was the spot where her family had scattered her beloved brother-in-law’s ashes over twenty years ago. See, I’ve been asking everyone I know about the ecology of the shoreline, the geology, the animals, the history … and also about how they use it or interact with it now. And Brenda reminded me that one of ways we use it is for rituals. Celebrations, mostly. People get married on the shore, they get engaged, they have birthday parties. But you’ve probably read the Isaak Dinesen (mis)quote, “The cure for everything is salt water: tears, sweat, or the sea.” We bring our sorrows here, too.

Weighing our options, we decided to bag the walk for the moment [I’ll try again next week] and instead drive up the Schooner Head Road a bit and then hike straight in to the memorial spot. We parked by the Atwater Kent Field monument, on the west side of the road:

The plaque commemorates the donation of 62 acres to Acadia National Park by the Atwater Kent Foundation in 1946. Kent was a famous inventor, and in 1925 his company was the largest maker of radios in the U.S.  I think he had a summer place in Northeast Harbor, and in 1927 he bought the Sonogee estate, which is between Hulls Cove and Bar Harbor. [If all goes well, I should reach Sonogee near the end of 2016.] He died in 1949.

Starting from the memorial, we hiked [relatively] straight toward the coast, passing through an unusual grove of oak trees; either young or stunted by the wind, their multi-trunked shape was more like an apple tree than what I think of as a typical oak:

We noticed a few rock cairns sticking out of the snow – there may be a path here, somewhere below. The terrain must be pretty rocky, as we found the snow would be maybe a foot deep on top of a ledge, and our next step would plunge three feet into the snow, like this:

Fortunately it was a gentle plunge, more like riding a slowly sinking elevator, and we reached the shore without mishap. It probably took us a good twenty minutes to get there, though.

J: So is this where you guys had the ceremony?

B: I think it was back there to the left, but this was the place where they used to come when they were in college.

J: Were they at COA?

B: No, they went to Orono. He was from Ellsworth, and we’re from Massachusetts, and they met at Orono. And he always used to come out here cause he loved it here. His dad grew up in the same house they lived in in Ellsworth, but his dad’s grandfather, I guess, on his mother’s side, grew up on Great Duck Island. His father was the lighthouse keeper on Great Duck. [That] was Michael’s great-grandfather. So his grandfather grew up out there. He had like 12 siblings or something.

J: At the lighthouse?

B: Yeah, … and then his grandfather, when he was an adult, lived in Northeast Harbor, so a lot of his relatives were from the island [MDI], and Michael was from Ellsworth. So he used to come out here all the time.

J: And he was married to your sister?

B: My sister Julia, yeah. They met in college and they married right after college, and he died when he was 25. 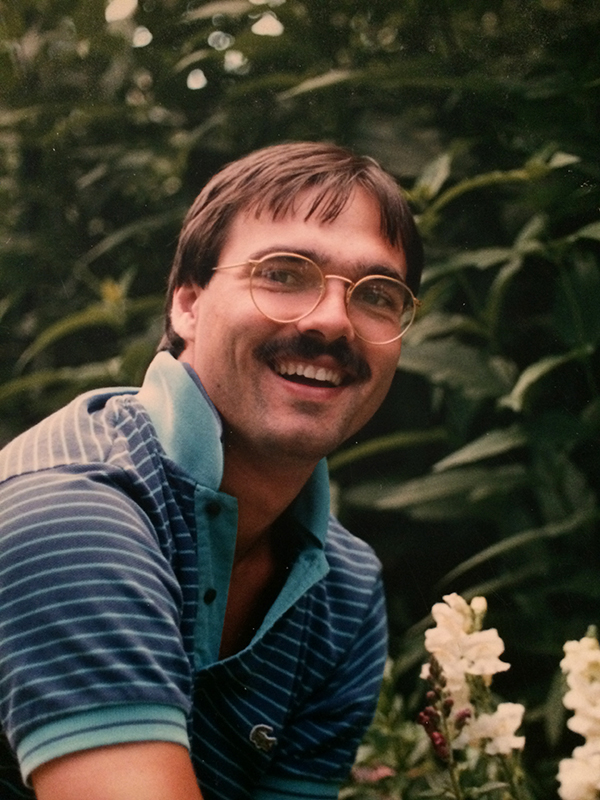 Michael Grindle, about a year before his death.

B: In a plane crash. Yeah, it was very sad. He was the promising child, went to college, he was really smart, he was a chemical engineer. Lived in Virginia. He was working as an engineer, and he was flying for work, he was flying home. And the plane crashed, it was a commuter jet, everyone died. It was terrible. … His parents still live in Ellsworth, in the same house they’ve lived in forever. My sister still keeps in touch with them. I guess he’s been – ’87 he died – so 28 years ago, I think?

J: And so you had the ceremony out here?

B: He had a funeral at a church in Ellsworth, and we came out here with his ashes and had a little thing, just  family and friends. It was in February; he died in February. There wasn’t this much snow, but it was pretty icy, and when my brother was holding the ashes he tossed them over the edge of the cliff and this wind came up and blew them back in our faces.

B: So we were all like, ‘There’s Michael!’ We all got a little Michael on us. When [my sister] comes up to visit she’ll come out here still to his spot. 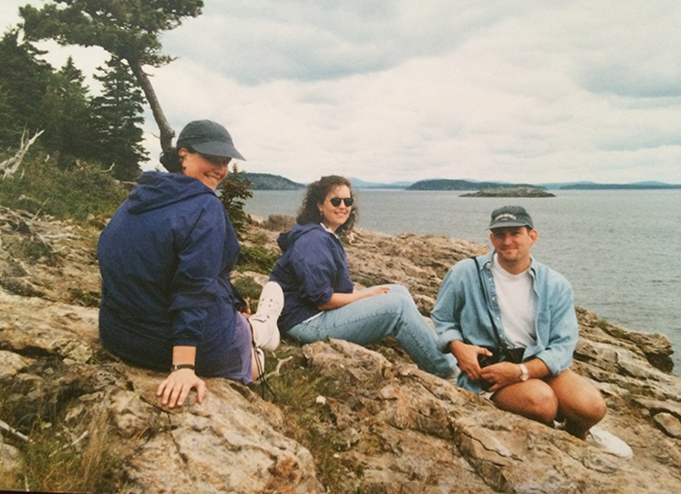 Brenda, Julia, and a friend at Michael’s spot in the early ’90s.

J: She picked a gorgeous place.

J: Somewhere where it’s nice for people to visit.

B: Yeah. This is a little remote, but they were 25 when he died, so my sister was like, ‘Oh this is fine,’ you know. My parents were like, ‘it’s a little rough getting there.’ But they did it.

We were quiet for a bit, thinking, and then turned and went a little further along the coast. I thought it might be wise to head back to the road while we still had enough energy to enjoy the climb, so we floundered back uphill through the trees, laughing at our awkward progress.

I’ll give this section another try next week – wish me luck!