Way back in December 1972, when she and her husband were new arrivals in Bar Harbor with two young children, they walked into the old Acadian Sandwich Shop one evening. Chad and Marion Smith, who also had two young children, were the only other customers there. Megan, the youngest Smith, was in an infant seat on the table, and Wendy and Heather forged a friendship rampaging around the empty restaurant. Mary doesn’t remember what Brian was doing, but knowing him I’m sure if he wasn’t actively rampaging he was instigating it.

Either way, the families became friends, and in 1974 they all agreed that with four little kids hyped on Christmas cookies and presents, it would be crucial to get out of the house on Christmas Day. More or less in self-defense, they planned a group walk on the Shore Path.

The tactic worked (at least for the grownups) and the Christmas Walk was born. For the next forty-odd years, at noon on Christmas Day, the Boohers, Smiths, and a growing group of family and friends bundled up and walked the Shore Path. I think my first year was 1989, when I started dating Brian. The Boohers are hardier folk than my own people (we Steens tend to curl up with a good book when left to ourselves), and the Christmas Walk happens whatever the weather. We’ve trekked trough deep snow, no snow, sheer ice, no ice, stiff winds, no wind, bitter cold, pouring rain, freezing rain, and snowstorms. Now and then there’s even sunshine! Sometime before I joined the group had started bringing hot chocolate and cookies for a picnic at the walk’s midpoint (usually the Bar Harbor Inn.) This picnic also happens regardless of weather.

In 1998, Brian and I brought along the Christmas Walk’s second generation – that’s me holding 7-month-old Christopher in the front row. The people at the ends of the rows are holding their arms out to include absent friends.

2000: I count 43 people, including multiple infants – Tabitha, almost 2 months old, is zipped up inside my coat at far left, which is why I look like a whale.

This year it was 33ºF (0ºC) with a stiff wind from the east and a wind chill of 22ºF (-5ºC).  It was the smallest group we’ve had since 1976! As the kids grew up, went to college, got jobs, married, and started their own families they moved all around the country, and Brian is the only one who has moved back to town. The other three are scattered from Utah to Madrid, and only occasionally make it back for Christmas. As the second generation grows up, we’ll see where they settle, but since the oldest is only 18, the third generation is still (ahem, had better be) a ways off. 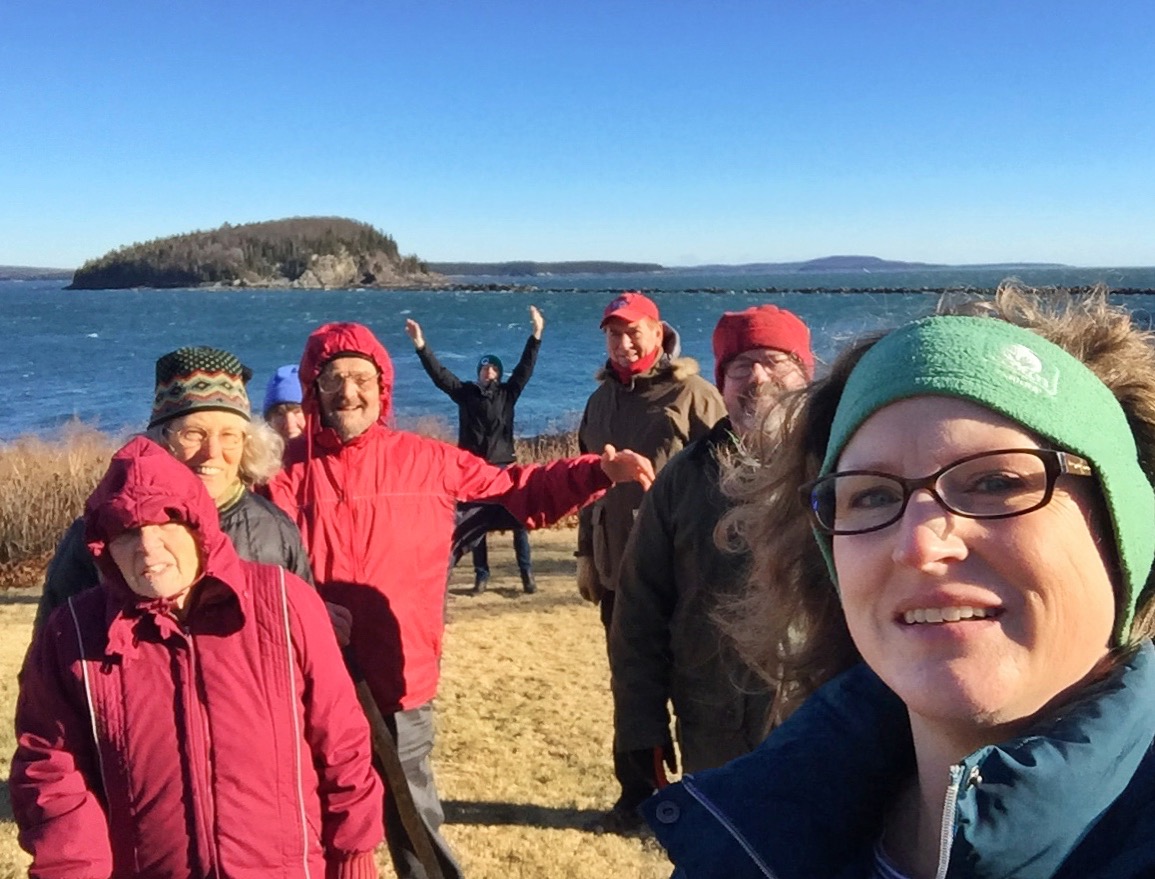 Anyway, consider yourself invited for 2017: remember, it’s noon on Christmas Day – bundle up – bring cookies – send me a message and I’ll tell you where we’re meeting!