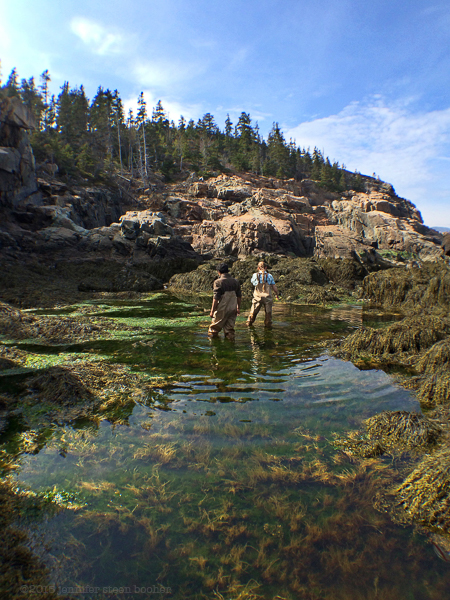 May 16, 2015: 3-4:45pm, 59ºF, had been overcast all morning but the sun came out just as we started to hike down. Very warm in the sun and out of the wind. Stayed sunny until we finished, then started to rain lightly when I went off on my own. 4 eiders (2 male, 2 female), 1 loon, 1 guillemot, 1 herring gull eating a very large crab (couldn’t see what kind), 2 nudibranchs (Aeolidia?), 1 sea urchin (Strongylocentrotus droebachiensis). 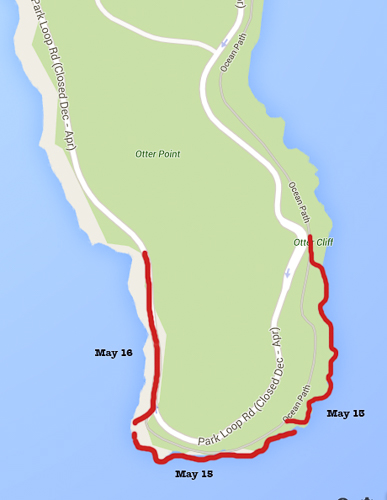 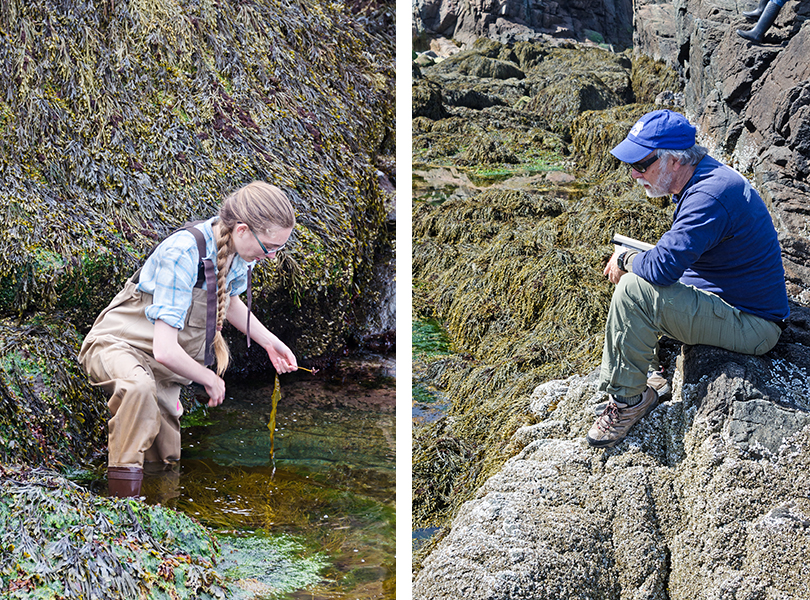 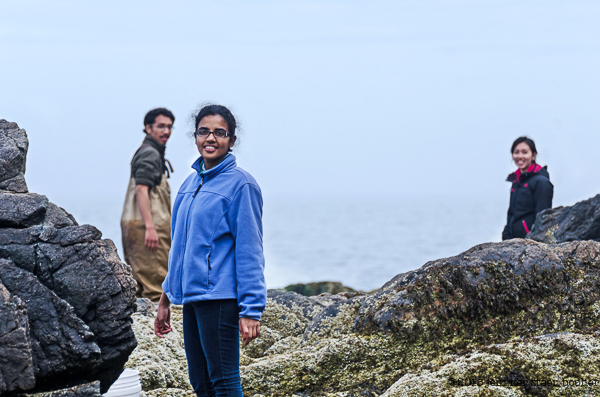 This was a bit of a bonus day – Chris invited me to join a field trip he had planned with his students as part of a long-term project. In the 1920s, Duncan Johnson and Alexander Skutch, visiting scientists at the MDI Biological Laboratory, spent several years making a very detailed analysis of vegetation in a large tide pool on Otter Point. They published their findings in Ecology magazine in 1928, accompanied by a number of black-and-white photos of the tide pool. [In a typical Coast-Walk-research wild goose chase, in the 1928 article the authors mention that the Bio Lab had a facility nearby called the Ogden Station, which sent me poking through Library of Congress maps and histories of the Bio Lab to figure out where on Otter Point that might have been. Nope, still no idea, although I did gather that it was only there for a few years.] Since the fall of 2013, Chris has been working with his students to re-inventory the tide pool with an eye toward determining whether there has been a change in the species or distribution of marine algae there, and if so, what might have caused it. [The term ‘marine alga’ is pretty much synonymous with what the rest of us call ‘seaweed,’ although it includes stuff like crustose coralline that most people don’t realize is a plant. Since I’m a groupie, not a marine biologist, I tend to use ‘marine algae’ when I want to be comprehensive and ‘seaweed’ when I don’t want to sound pompous.]

The students were able to use the old photos to identify the tide pool, which I found pretty impressive, given that they were working from shots like this (same area at high and low tide): 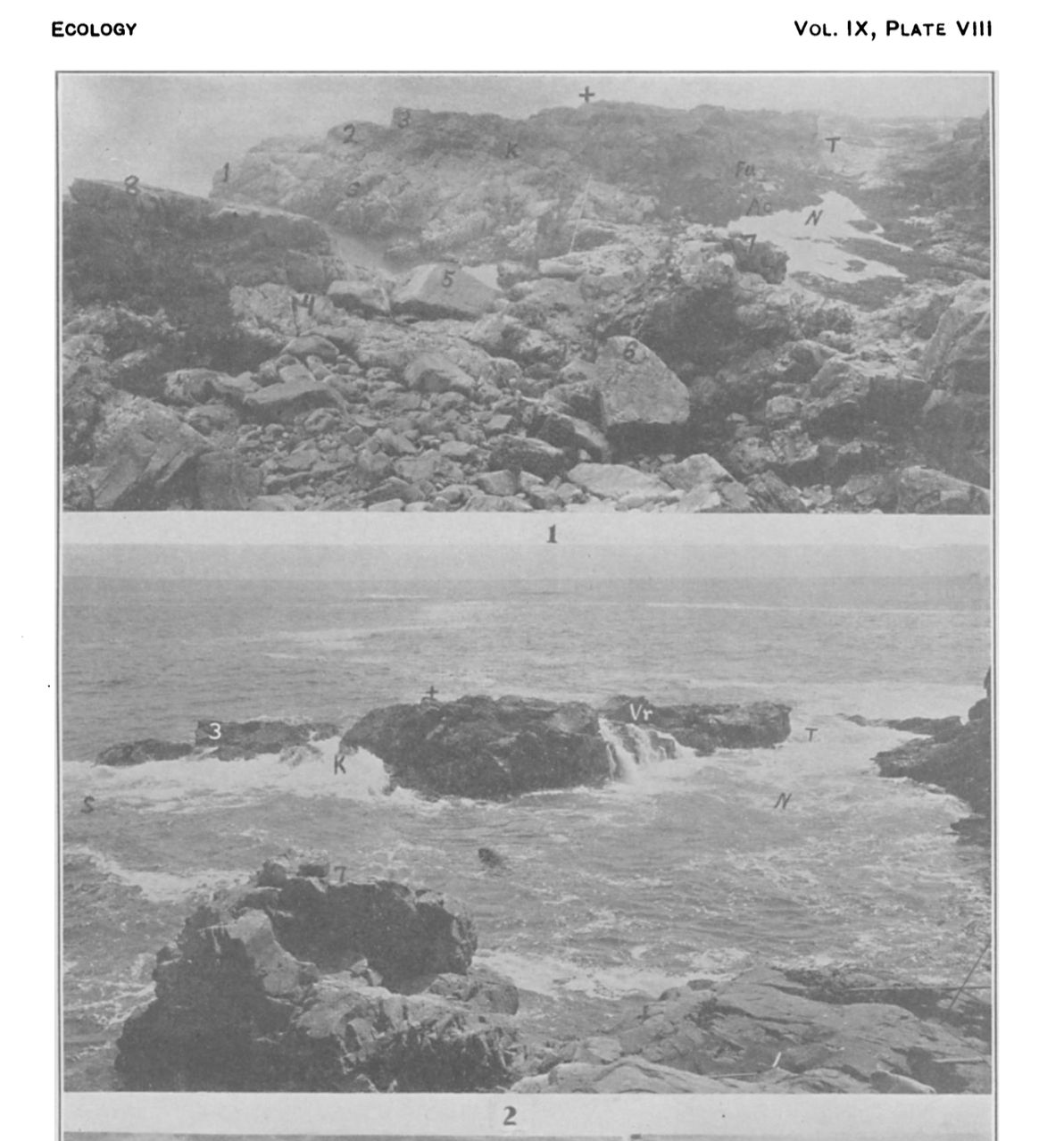 In their preliminary report from 2014, students concluded that the number of species had dropped from 46 in 1928 to 24 in 2014. They also noted that 12 of the 2014 species had not been identified in the 1928 report. It will be very interesting to see how those numbers change with the seasons and over the course of several years.

Jumping back to the present day (a lovely spring afternoon), I met Chris and the others near the Otter Point parking lot, where we hiked down to the study area: 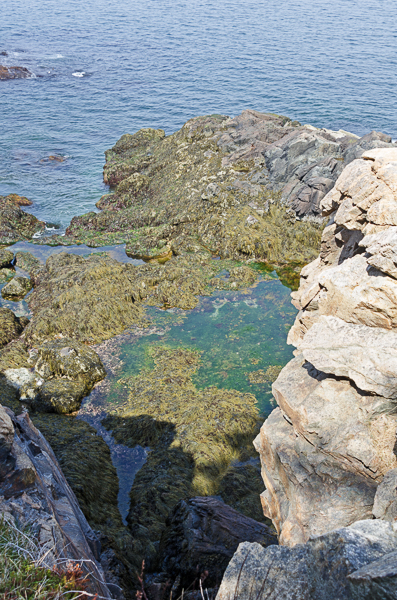 Everyone else got straight to work, climbing into waders and gathering samples while I hovered on the rocks above, asking questions and trying not to get in the way. I’ve mentioned before that identifying seaweeds often stumps me, and it made me feel slightly better to learn that several of the seaweed species couldn’t be confidently identified without a microscope. 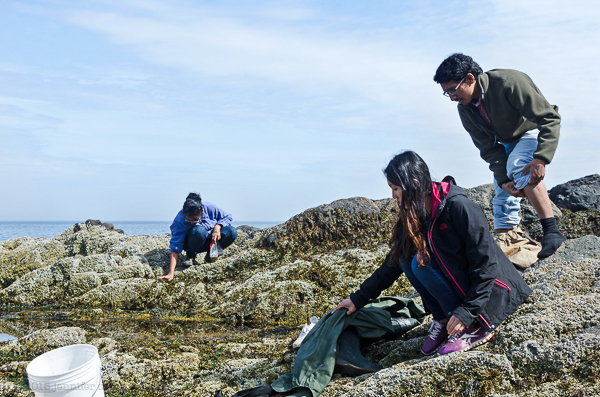 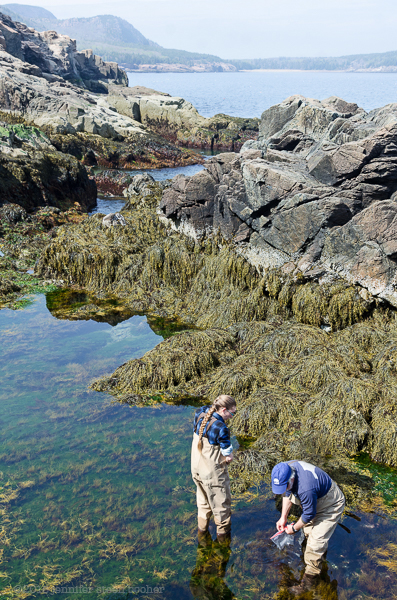 Chris was able to help me distinguish between Rough Periwinkles (Littorina saxatilis) and Common Periwinkles (Littorina littorea), something I’ve been trying to figure out for years. Rough periwinkles are tiny, and look a bit like a Northern Lacuna (Lacuna vincta, which I saw for the first time back at Schooner Head) but live higher up in the littoral zone – the lacuna stay deeper, which is why I’d never noticed them before.

So if I’ve got this right, this is a Rough Periwinkle: 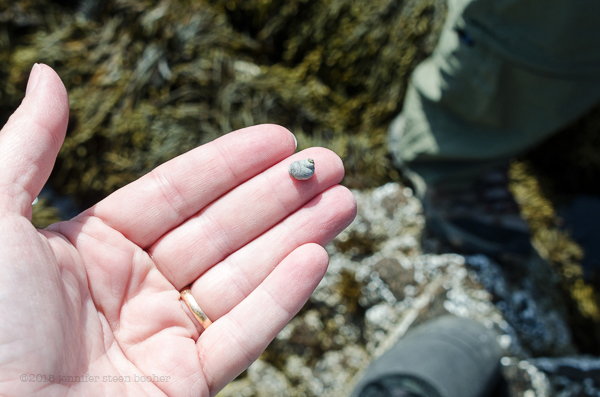 and these are Common Periwinkles: 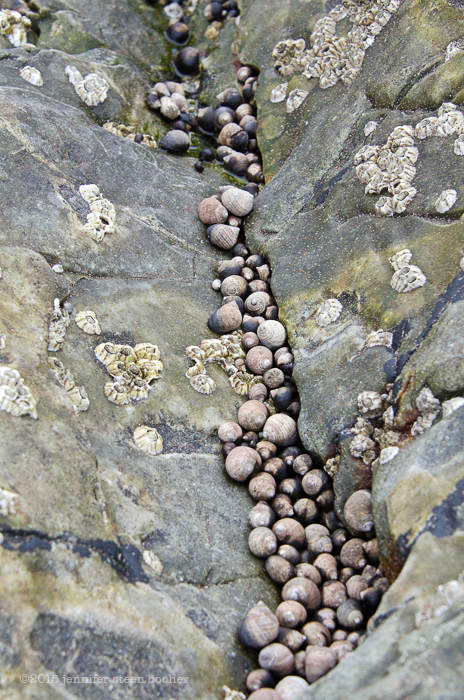 and this is a Northern Lacuna: 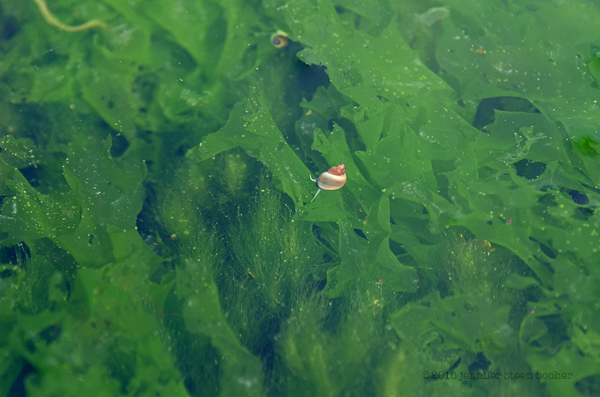 Cool, I think I’ve got it! And as a bonus, Rose found Lacuna eggs in the tide pool (those are my fingerprints in the background for scale): 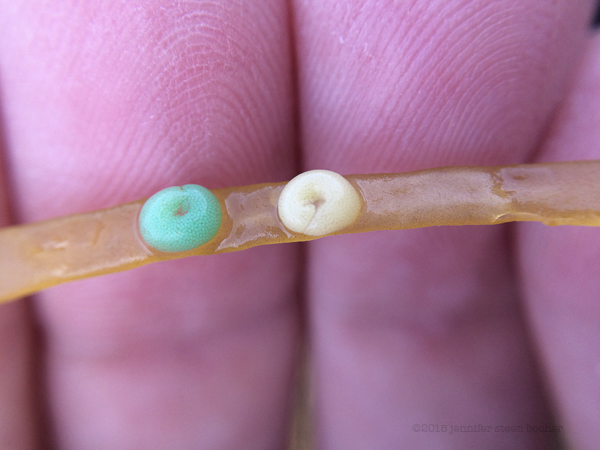 Chris pointed out that the green algae (like the stuff Kelley and I called ‘Elvis Velvet’) are growing right now, but the periwinkle are eating them, moving outward from cracks in the stones, so all those bright green areas will disappear in a month or two, and later in the season red algae will dominate the rocks: 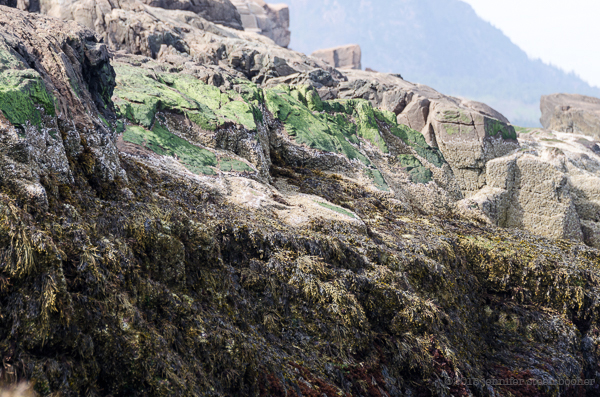 Just then a seagull pulled an enormous crab out of the water, which put up quite a fight, and I got distracted wondering which of them would win: 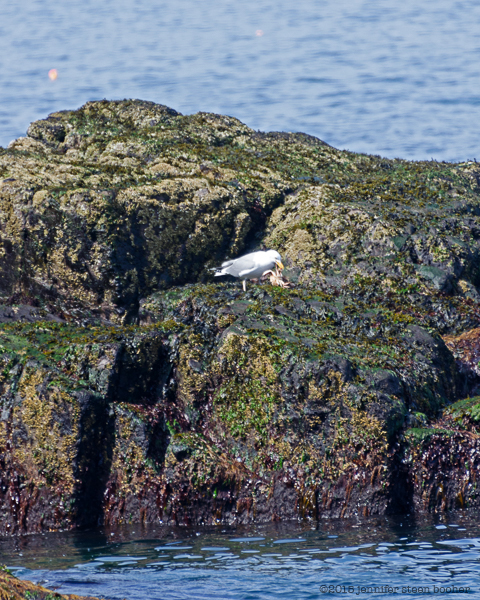 The seagull won. And then the wonders started coming thick and fast. There was a limpet on a piece of seaweed, which it couldn’t cling to as effectively as a rock, 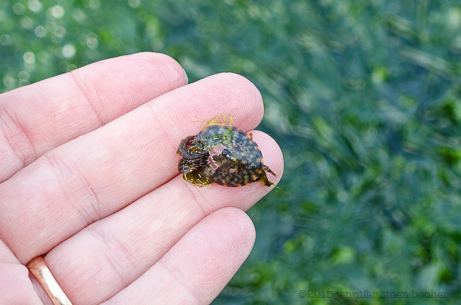 so I got to see the soft side of a limpet for the first time: 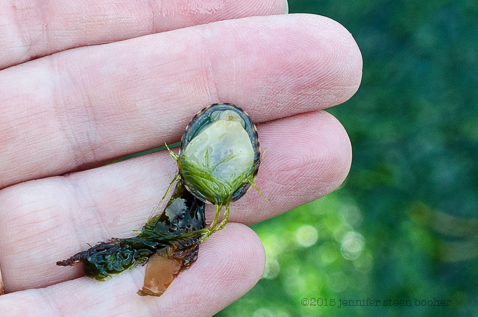 And then Rose found a Maned Nudibranch (Aeolidia papillosa?): 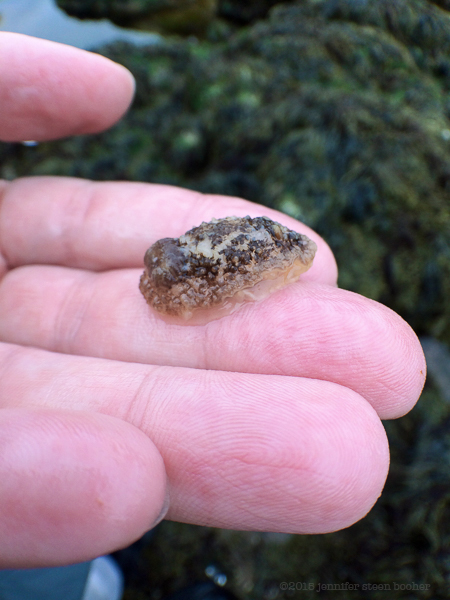 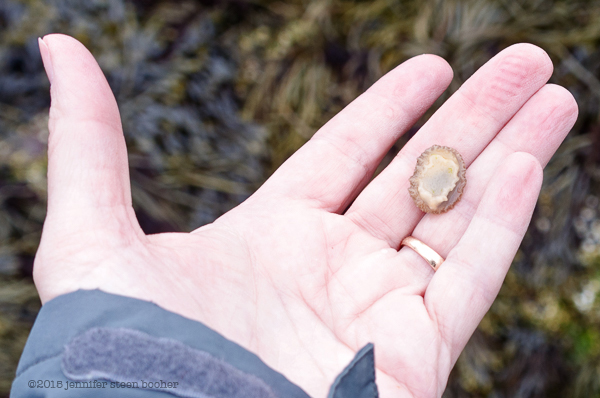 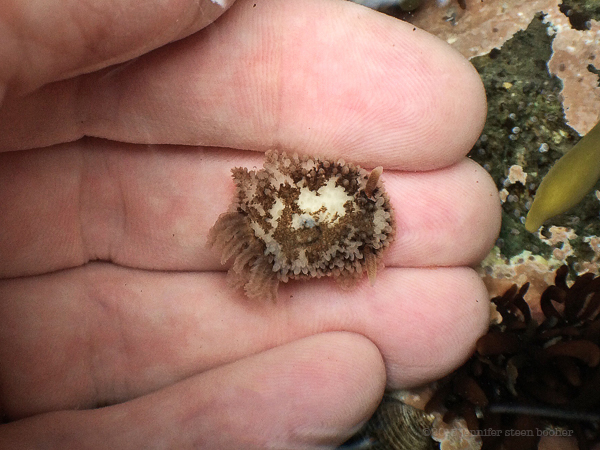 Even cooler than the little white one I found yesterday! Then we found a tiny sea urchin (Strongylocentrotus droebachiensis), decorating itself with a bit of kelp: 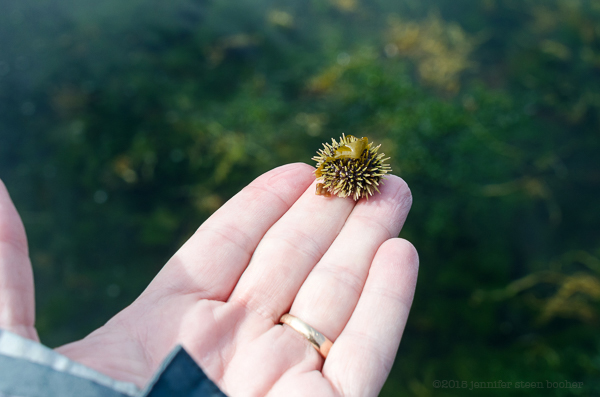 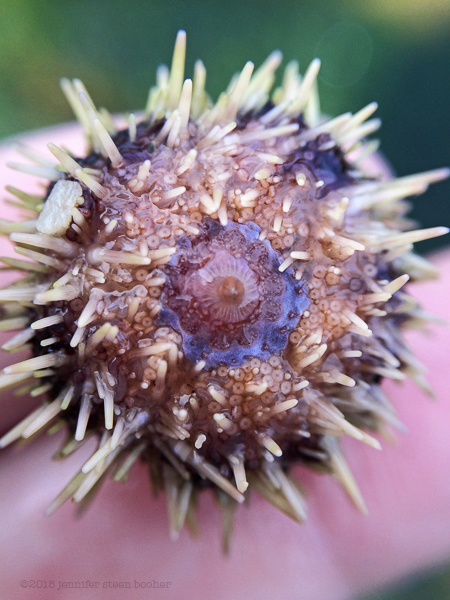 There were others hiding under a ledge, covering themselves with bits of rock and barnacle shells. Chris said no one knows why they do that, some people say it is camouflage, but others believe it is to shield themselves from the light. 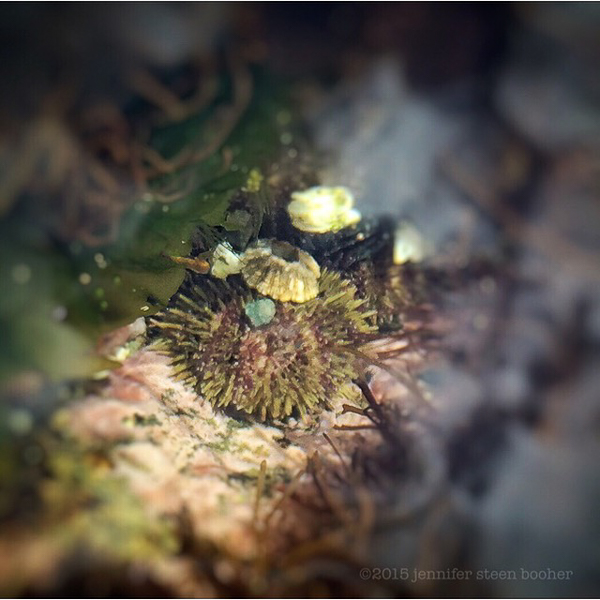 After an hour or so, the group felt they’d done a fairly complete survey, and we headed back up the cliff. I thanked everyone for letting me join them, and continued on, determined to finally make it around the end of Otter Point. A thick bank of clouds had drifted up, and the temperature was dropping. As I walked over a relatively flat section of ledges just a little way off the path at the top of the cliff, I stopped short, peering into a brackish pool. 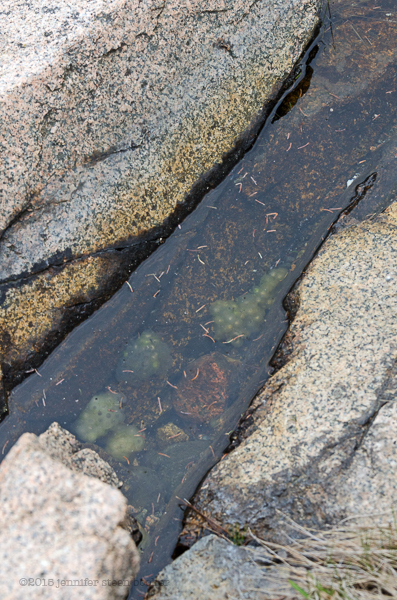 Salamander eggs at last! And so close to hatching I could feel them wriggling in my fingers. (I lifted this clutch up just long enough to snap a photo, then put it back gently and carefully.) I think these are Spotted Salamanders (Ambystoma maculatum). 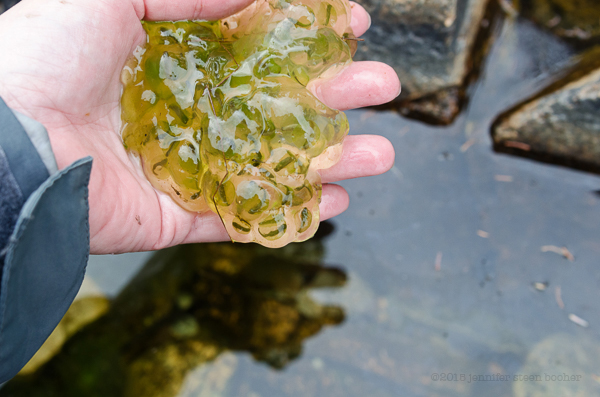 While trying to identify the eggs I learned something new: the green color is from an alga, Oophila amblystomatis, that has a symbiotic relationship with the embryo. Apparently the jelly surrounding the eggs keeps them from drying out, but (according to Wikipedia) it also makes it hard for the embryos to get oxygen. The alga produces oxygen through photosynthesis, and also consumes carbon dioxide produced by the embryos. Even trippier, there’s evidence that the alga gets into the embryo’s cells as it develops so it gets passed from generation to generation. Mind boggled, again.

I couldn’t be sure, but it looked like some salamaders had already hatched: 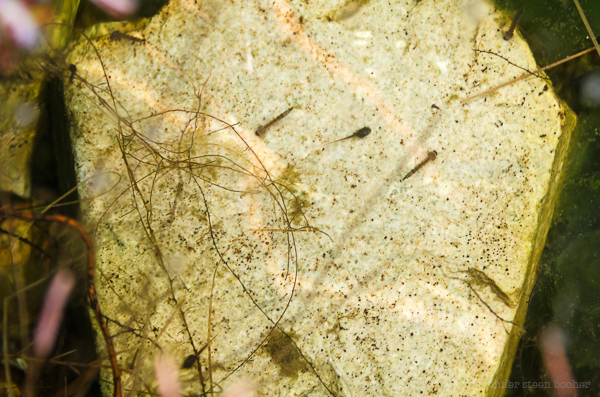 There are three swimmy-things in the upper part of that photo – the two outer ones are mosquito larvae, but I think the center one is a newly-hatched salamander. 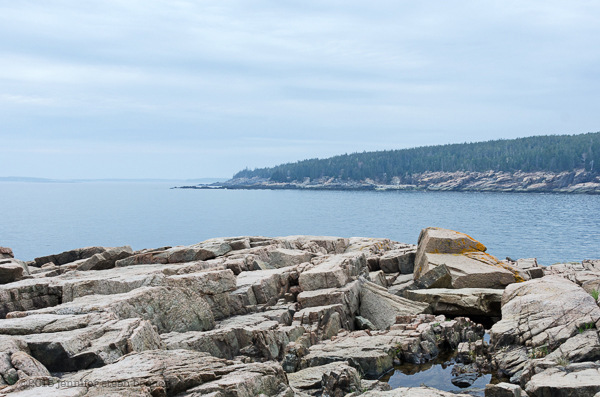 When I finally stood up again (having been squatting, lying down, and generally hovering over the salamander egg pools for at least half and hour), I stretched, shook myself, and realized I was looking across Otter Cove at Western Point, and when I turned, there was the cove itself. By now, though, the temperature had dropped almost ten degrees, and fat raindrops were splashing down around me. I scrambled a little farther across the ledges, hoping to make a least a little progress into the cove, 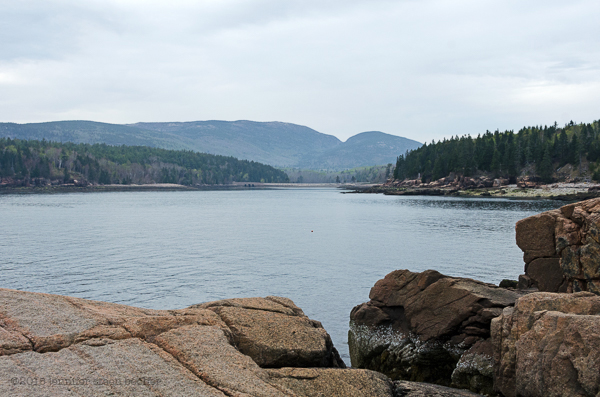 but the ledges abruptly dropped off into a much more tumbled and slippery-looking landscape: 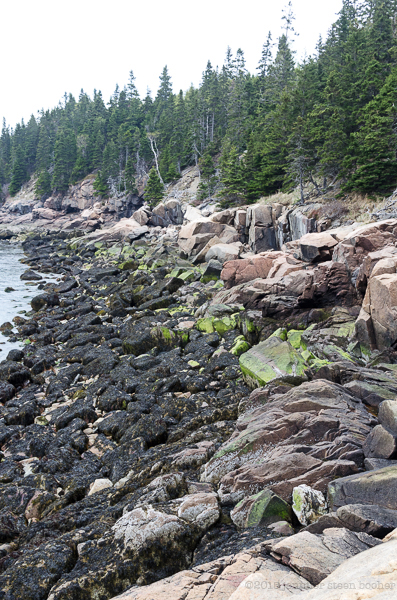 For a few minutes I stared at those rocks, tracing possible routes through the seaweed or up and down the ledges. There was no simple way down from the ledge I was on, so I walked along the road for a bit, looking for a passable descent. I’d already spent three days on Otter Point – longer than I had estimated it would take me to get all the way along the eastern shore of Otter Cove. I could feel the two years I’d allotted for this project stretching longer and longer, and the pressure building to get as far as possible on each walk. Then I sighed. The rain was getting more determined, the tide was on its way in, and I was already tired; the idea of wobbling and scrambling while getting drenched from above was decidedly unappealing. I headed back to the parking lot. There’s always tomorrow!