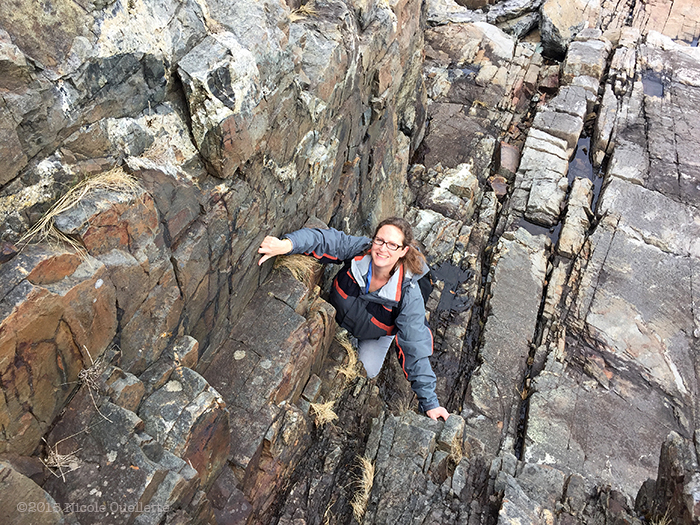 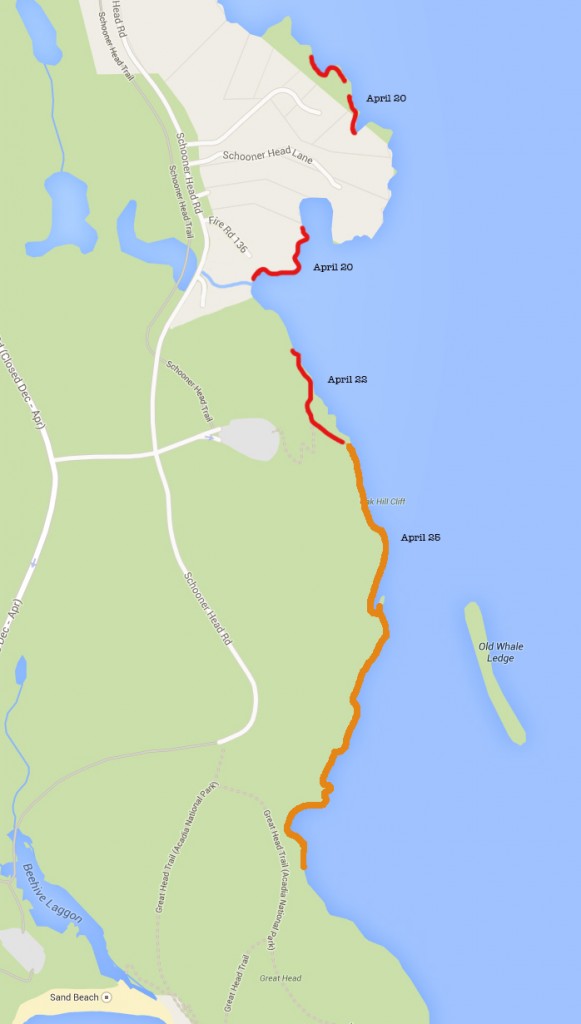 Nicole and I picked up where we had left off a few days earlier, just south of the Schooner Head overlook. We were able to get down to sea level pretty quickly, and the photos above will give you a good idea of what the terrain was like. We made surprisingly good time, especially considering how often we stopped to look into tidepools or admire peculiar rock formations. Look at Nicole mountain-goat-ing it up that narrow ledge!

I use my iPhone to record conversations on these walks, and had the same problem today as last time – the surf and ambient noise drowned out our voices on most of the recording. Grrr. I think that we were too far apart for the microphone to work well, and that’s going to be hard to manage while scrambling over this kind of terrain. 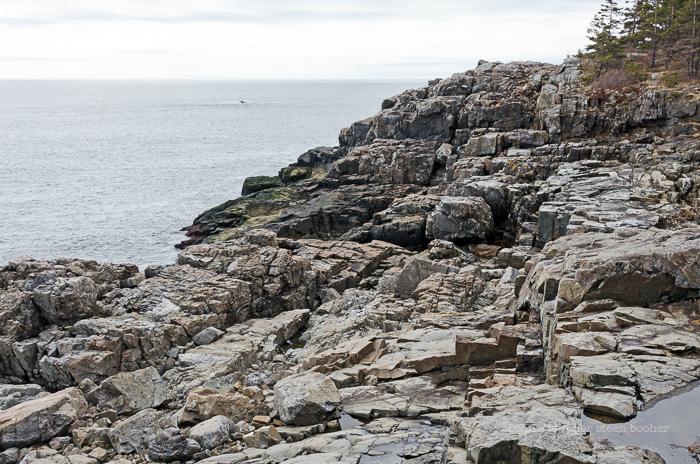 The rock was full of inclusions (iPhone for scale): 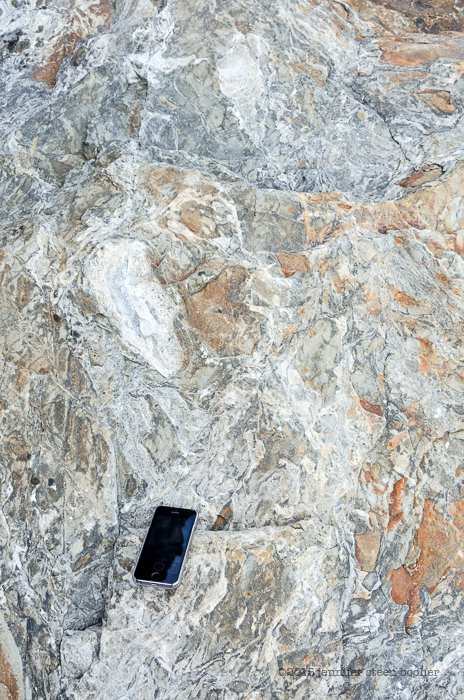 This seems to be typical shatter zone, where the erupting volcano broke apart the older stone. Chunks of it were floating in the magma, either visible as large pieces, 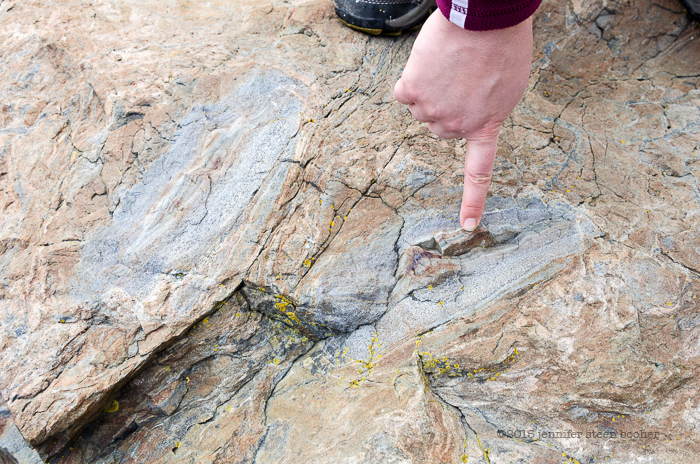 or melted and swirled in: 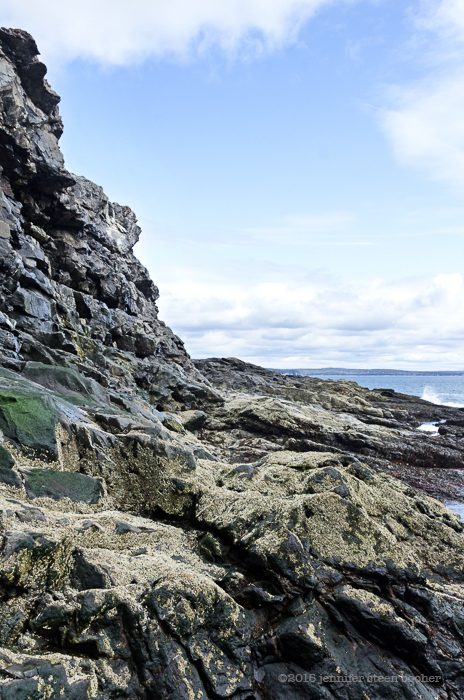 In a lot of places the older stone was softer than the new and has eroded away, leaving empty pockets: 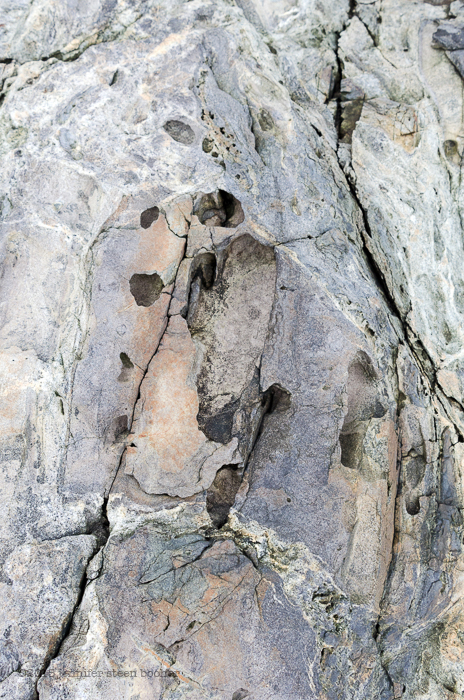 I did manage to capture this exchange as we came around a corner and saw this boulder:

A glacial erratic is a large stone that was carried by a glacier from its original location to a new one, often many miles away. They usually stick out because they are a different kind of stone from their new surroundings, like this enormous white granite piece dropped amid shattered Bar Harbor Formation.

J: We’re such geeks. Is geology geek a thing?

J: What is a soft rocker?

J: So is this igneous, the way it’s flowing like that?

N: Like glaciers, or getting heated up under the ground, or colliding with another rock. Structural geology was my least favorite class.

J: So what is structural geology?

N: You look at fault lines, [you ask] ‘what happened to this rock.’ What’s nice about geology is you can tell three different stories about something and they could all be equally true. The rock’s not going to be like, “Actually…” So there’s no truth, as long as your story matches the evidence.

N: Yeah. Well I think you go into science because you’re in high school and you’re doing experiments, and they always have some set outcome, so you get to college and you’re doing these things and you don’t know the outcome, or you do six months of research to find out that your data isn’t showing anything. That’s real science, but no one prepares you for that. So you feel this crushing sense of disappointment that you didn’t discover something. Preparation for life, I suppose. 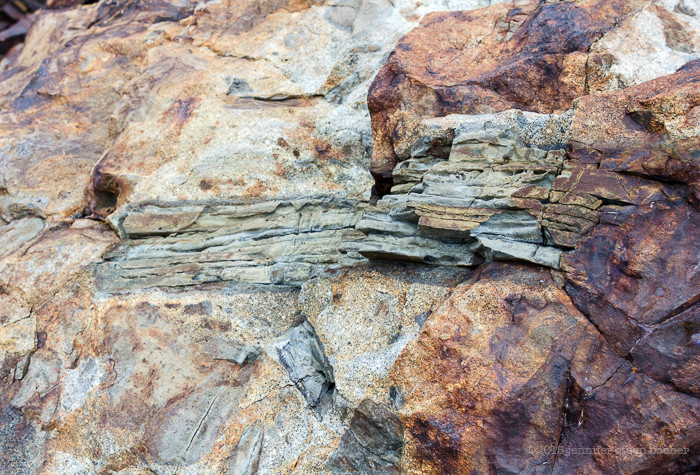 And then Nicole started interviewing me!

N: Now what was your college degree in? Did you go to school to be an artist?

J: No, I was art history and asian studies.

N: How interesting! Did you have an Asian arts collection, or how did you get into that?

J: I think it’s because my parents – my dad was stationed on Guam during the Vietnam War, and they came back with a whole ton of cool stuff. Our house was furnished in Hong Kong furniture and Japanese woodblock prints.

J: Yeah, we had little buddhas everyplace. Not because we were buddhist, just because they were cool. And I was just really curious about it, and I got into it more in an academic way in college. But then I spent a year in Japan, my junior year, and I realized that in order to become a serious Japanese art academic, it wasn’t enough that I was getting to be fluent in Japanese, I was going to have to learn Old Japanese, which is like, Chaucer. It’s a whole other language. And I was going to have to be able to read it in penmanship, to be able to decipher signatures and inscriptions. And I was just like, it’s going to take me ten years just to get the language down to the point where I could be that kind of academic, let alone studying the art itself. Ooh, tidepool! Let’s go look at the tidepool! 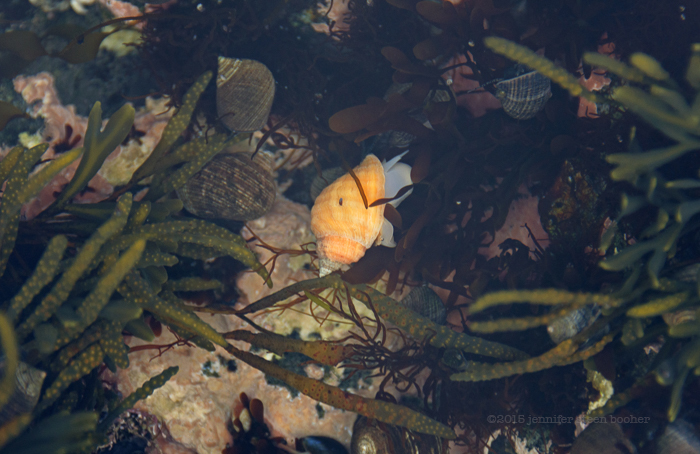 So we did. That’s a dog whelk (Nucella lapillus) moving along a patch of seaweed up above. 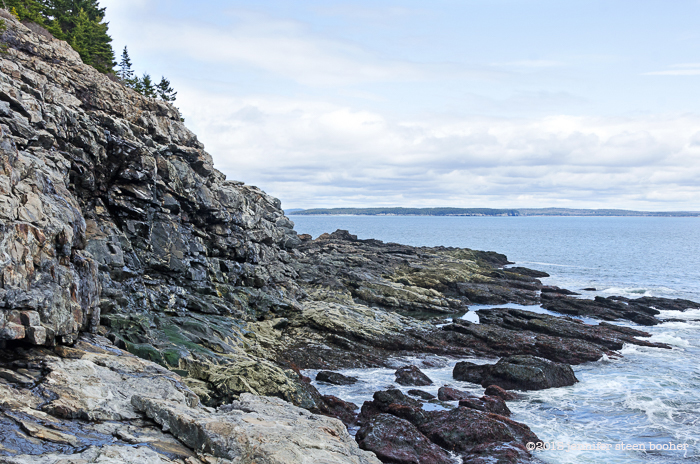 As usual, we came to a point where we had to go back up the cliff to continue, and eventually we reached a deep cleft in the cliff. I always have to look into these, because there might be a cave at the end of them. Clearly I’m slightly obsessed with sea caves. It took us a minute to see what was unusual about this cleft: 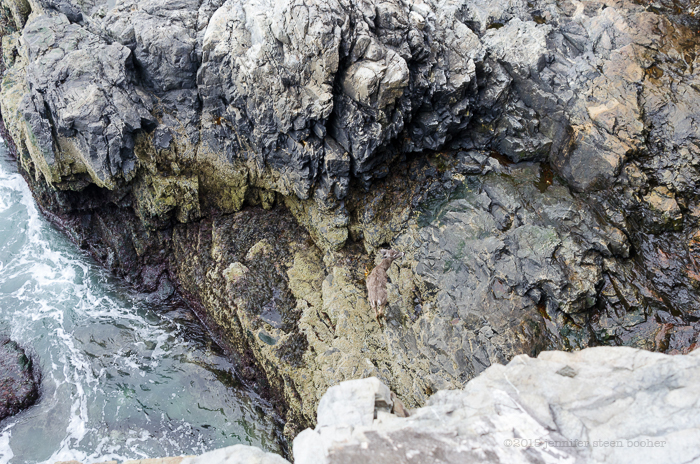 Can you see the deer? We think she must have fallen down the rocks and gotten stuck down there. Her side was badly scraped, her nose was raw, and she was shaking. (Don’t worry, I’m not showing photos of her injuries.) At first I thought her leg was broken, and she would have to be shot, but then we realized she was just slipping on the wet, algae-covered rocks. We weren’t sure what to do. It was Saturday and the Park business office was closed, so we called the local vet, who suggested calling the police, as they could reach the park rangers. So we did, and while we were waiting to hear back, we worked our way down into the cleft to see if we could help the doe in any way. This of course took us out of cell phone range. (The island has notoriously spotty coverage because we have all these big, solid mountains blocking the signals. If you come here to hike, don’t count on using your cell phone!) 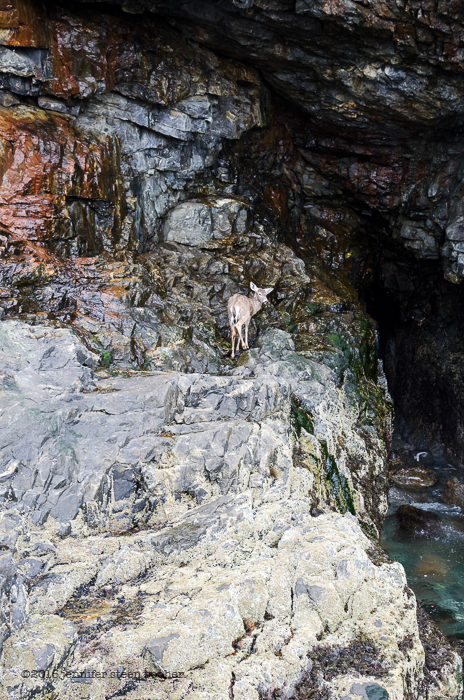 She was clearly not happy about having us down there, and we didn’t want to get too close and possibly freak her out. 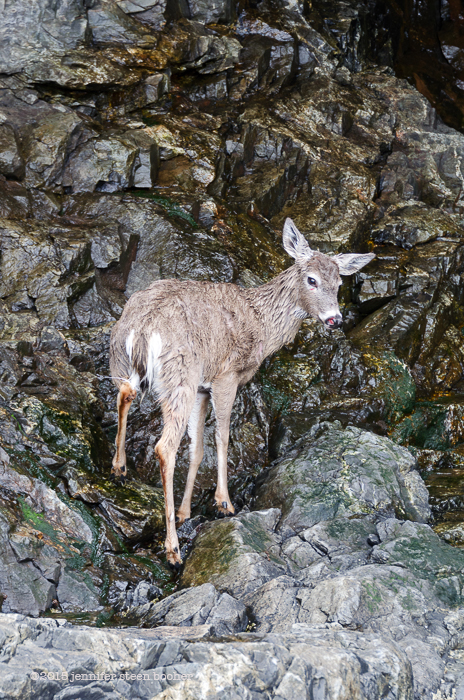 I thought maybe if I walked this way, she would move that way and find the path, but she didn’t move. We stared at each other for a while, then I took an apple out of my backpack and left it on the rock for her, and Nicole and I headed back up the cliff. There just wasn’t anything we could do. 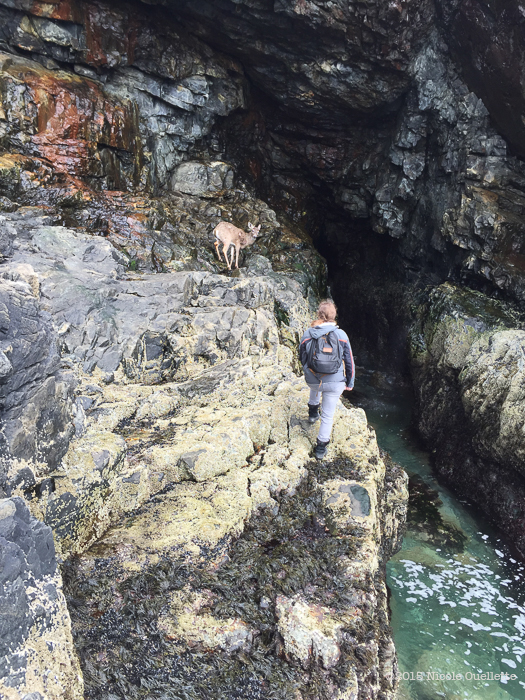 Pretty soon we came to a cobble beach, and we could see people moving along the trail to Great Head just inside the tree line. We sat on the rocks looking into a tide pool and had some snacks Nicole had brought (I’d left mine for the deer) and then we walked back up the trail to the Schooner Head parking lot, where we finally got phone reception again. Both the ranger dispatch and the police department had left messages. Turns out two rangers were there at the overlook responding to our call. We found them, gave them better directions for finding the wounded deer, and they seemed pretty confident that she’d be alright. One of them pointed out that deer are excellent swimmers, and she could get out at high tide. Given how wounded and shaky she was I’m not so sure, but what I don’t know about animals would fill an encyclopedia. I haven’t heard back from them about how the rescue played out, but if I ever do, I’ll let you know. 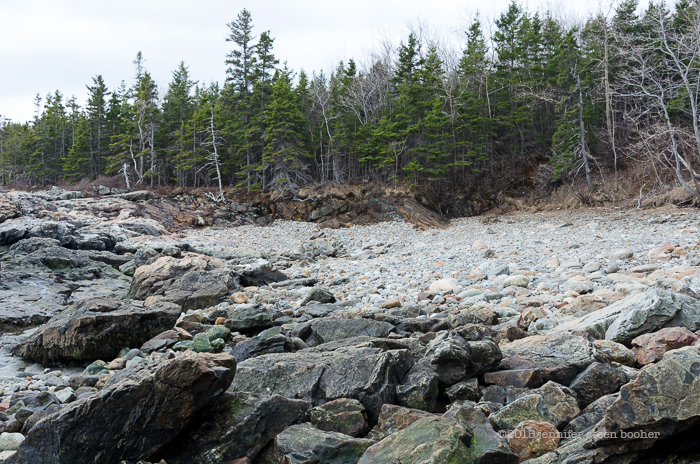 In the next episode, Rich MacDonald of the Natural History Center will be walking around Great Head with me!