I haven’t posted in ages because this past month or so has been a bit of a struggle and it didn’t seem like I had much to report. The snow just kept getting deeper, and the few spots where I might have been able to climb down from the cliff were waterfalls of ice, so I’ve been trekking along the top of the cliff. It’s frustrating, as I feel I’ve been missing a lot of the shore, and the ground was hidden under a good three feet of snow, so my observations have been limited to trees, snow consistency, and how damn cold it gets when the wind is blowing. I’m getting better at snowshoeing, though. Now I only occasionally fall over because I’ve stepped on my own shoe! So here’s the summary of what happened in March. 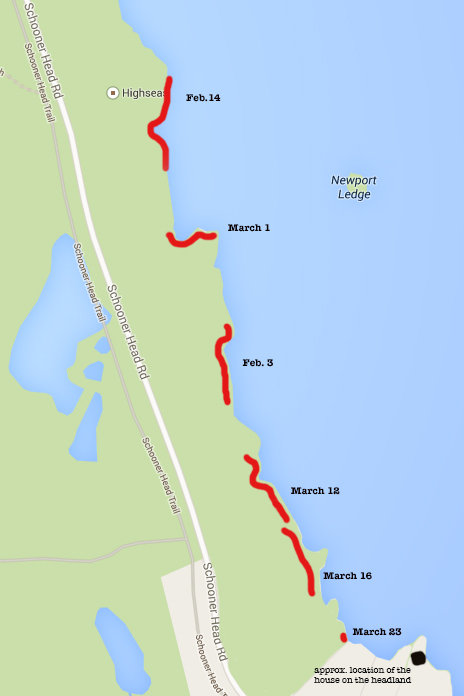 All the segments so far

March 12, 2015: 35ºF, strong wind from southeast-ish but it shifted a lot, so can’t really say a direction. Sunny and comfortable in the sheltered areas, very cold in the wind!  1 crow, 2 black ducks

My friend Jane Holland (of the Aysgarth Station B & B) came with me today – I’ve had to stop interviewing people because A) we need our breath for climbing uphill through 2 feet of fresh powder, and B) the snow makes crunchy cornstarch sounds that drown out conversation. All you can hear on the recording is “Crunch, crunch, sniffle, cough, honk (as I blow my nose because the cold wind makes it run like a faucet) , crunch, crunch, cough, poof (as I step on my own snowshoe again and keel over sideways.)”

The terrain here rises up a bit from the Schooner Head Road and then drops down toward the ocean, where it cuts off into a cliff:

There were snowshoe tracks down near the cliff top. It was the first time since I left the Shore Path that I’ve seen someone else’s tracks in front of me, and I was surprisingly put out. Guess I’ve gotten a bit spoiled by all this pristine snow. I did hope it was someone who had read my last post and came to see how beautiful the area is! I’d never explored around here, didn’t even know it was part of the park, and I’ve just been amazed at how lovely it is. The forest has been Red Oak pretty consistently since High Seas, and I can’t believe I never noticed that before. It seems like most of the places on the island that I’m familiar with are either dominated by maples or by spruce. It’s especially noticeable in the winter, because the oak trunks are so smooth and patched with pale gray (they must be relatively young.)

Jane spotted a freeze-dried mouse next to a snow-burrow that had been opened up by something searching for food – fox, mink, other predator? Then we started to notice burrows all over the area, each with a few acorn shells outside the entrance. Ski pole included for scale:

Yes, that’s something’s scat, but neither of us knew what kind of animal left it. Something trying to dig out the mice, maybe? And here’s the dead mouse. I made the photo small because I know not everyone is fascinated by poop and corpses.

The oddest find of the day was a contraption meant for grilling fish that someone had stuck in the branches of a tree. Jane and I debated whether a storm could have lodged it there, but given that we were a good fifty feet above hide tide we thought it doubtful.

The cliff edge was fairly thickly wooded by this point and the combination of wading through deep snow and bushwhacking through spruce trees started to wear us out, so we headed back uphill while we still had the energy to enjoy the climb. I had one last glimpse of Schooner Head through the trees, and it finally feels like we are getting close!

March 16, 2015: 41ºF, some wind, sunny. A mixed flock of seabirds – about a dozen black ducks, a couple of herring gulls, and a couple that might have been eiders (too far away to tell, even with telephoto lens.)

I went on my own today. There was enough snowfall yesterday to erase our tracks near the road, so it was a bit of guesswork to pick up where we left off. I only saw one burrow this time – the others were probably covered by the fresh snow. The terrain gets very steep here, and I saw on a map that this is (or was) called Cranberry Hill. Can’t remember which map now – I got a little careless with my note-taking, sorry. Heading up from the road it was a Red Oak forest:

but heading down toward the ocean the spruces took over. This was the least fun Walk I’ve had yet, because the terrain was so steep and the trees were so thick that it was very hard to walk in snowshoes. The snow had firmed up since Jane and I went out, so at least I wasn’t sinking into it, but imagine the angle my ankles were at walking across this in snowshoes:

I actually took a snowshoe off  to test the snow because it was so painful to walk that way, but I promptly sank in up to my knee, and had the dickens of a time getting back out!

The spruce got really dense along the cliff edge, so I couldn’t see the ocean at all, and pushing through the needly branches with my ankles all twisted from the terrain was No Fun At All. After a bit I started to worry that I was actually going to do some damage to my ankles, and this would be a hell of a place to get stuck, so I headed back up the hill. I got glimpses through the trees of Schooner Head, and it looked like I would be able to reach the shore there, so my plan was to start there on the next Walk and hike backwards to finish this stretch of coast.

When I reached the top of Cranberry Hill, my bad mood evaporated because the view was stunning:

Champlain Mountain covered in snow, with the red oak forest spreading like silver mist through the valley. My god it was gorgeous! I couldn’t capture it in photos. A wider lens (and maybe a better photographer) would have helped.

Looking down from Cranberry Hill: you can see Schooner Head Road at the bottom there, and just barely pick out my car parked on the road. But you can see what I mean about the red oak forest – it fills the whole valley and spreads all the way to the coast.

And boy, was I ever glad to get back to my car after all that!

This is a really short one. I forgot to take notes, drat it, but it was a very cold morning, about 9ºF with a fairly brisk wind, and sunny. My husband, Brian, came with me. You remember him from last month, right? Our plan was to hike in along the park’s border with the northernmost property on Schooner Head, and scramble down to the shore at the house. See, I had received permission from the property owner to walk along their shoreline, but forgot to ask permission to walk in along the driveway – doh! The snow had frozen pretty solid, and our snowshoes didn’t sink in at all. It was a pleasant walk through the usual red oaks:

Took about 15 minutes to reach the shore, but even though it wasn’t much of a drop, maybe six feet or so, it was completely coated in ice. We thought we might have been able to get down at certain points, but our hands were still cold from putting on our snowshoes, and we’d have had to take off our gloves long enough to swap snowshoes for creepers … I decided that reaching the shore with frozen fingers would be kind of pointless. And then there was the question of getting back up a six foot tall ice slide… So we went home. And I was discouraged. I thought I would try going back to the same spot in a week to see if the ice was melting (after all, it was practically April) but the day I planned to go we had a beautiful mix of rain, snow, and sleet. And I was even more discouraged. Which is why it took me two weeks to finally write this blog post: I didn’t think I had anything to show you. Funny, though, as I’ve been editing the photos and writing, I realized I did get to see a lot, even if it wasn’t what I had planned. And now it really is April, and there’s bare ground showing through the snow in town, although it’s still at least a foot deep out in the park. I’ll go back and try again next week. I have to get ’round Schooner Head this month, because several of the property owners who’ve granted me access start renting those houses in May, and don’t want me intruding on their renters. So complicated!