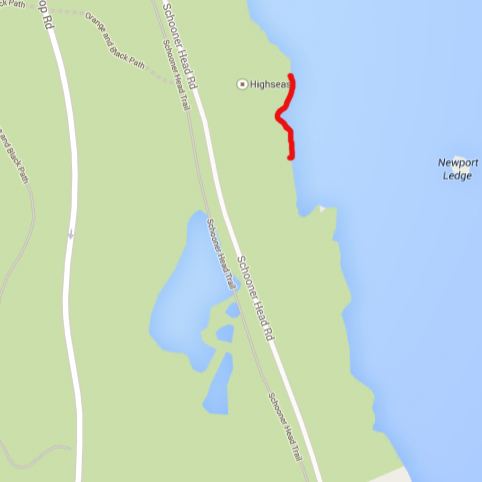 This was one of the most beautiful sections of shore I’ve seen. When I started down the cliff there was a very light sprinkling of snow in the air – the flakes were tiny ice crystals, so it was like walking through a shower of glitter. Gorgeous, and well worth having my cheeks frozen and wind-burnt to see. Here’s how I got down the cliff:

alternately trudging through snow over my knees and sliding on my bum. I’m going to need new snowpants by spring!

That headland in the distance is Schooner Head, where Coast Walk 6 is supposed to end. It seems awfully far away. On this walk I didn’t quite reach the point of land in the middle of the photo. It’s hard to see, but the shoreline is cut by several deep gullies that go way back into the cliff, so it’s a longer hike than it looks. Even at low tide, they still have water in them, and I had to wade to get as far as I did.

There wasn’t much wildlife out; four black ducks or female mallards (I can’t tell them apart), one male mallard, and a couple of eiders. There were squirrel tracks, and prints that could have been either a fox or coyote.

My big motivator for this hike was the rumor of a sea cave somewhere south of High Seas. I spotted something in the cliff face that looked promising – can you see the enormous dark arch in the middle of the photo below?

Here’s a slightly closer look. I couldn’t quite get to it on this trip – there was another deep gully between us, and the tide had turned.

I was tempted to keep going – it was so close! – but stopped for a reality check: alone at the base of a sixty-foot cliff, snow coming down harder every minute, tide starting to come in, freezing temperatures, two gullies to wade through to reach the only way back up the cliff … I turned back. Not giving up, though! The shore is only passable at dead low tide, so it’ll have to wait for the right day. Meanwhile, it looks like there might be another way down just past the [potential] cave. If it ever stops snowing, I’ll go around the top of the cliff and check that out.

Yes, it will be more comfortable to explore in the summer, but I will miss views like this.

When you look out into the landscape, everything is monochrome greys and whites, but when you look up close, it’s technicolor.

The hot pink is Coralline, a crustose form of marine alga that uses calcium carbonate in its structure. It looks like stone, or a crusty coral, but it’s a plant.

The Maine version of stars in your eyes: