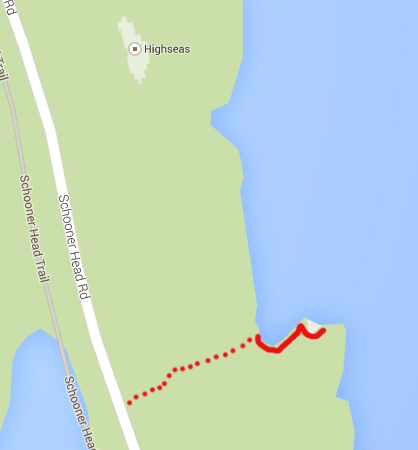 I’m still hiking the area between High Seas and Schooner Head, and hope to finish it in another 2 weeks if conditions stay the same. My husband, Brian, joined me on this section, and we both tried snowshoes for the first time. He wore a vintage pair his parents had inherited, and I had a modern pair on loan from a friend (thanks, Kelley!) We both used our battered old cross-country ski poles for balance. It was a lot of fun, and definitely beats floundering through thigh-deep snow banks. It got a little tricky in the thick woods, though; I had to keep disentangling my feet and my poles from low-hanging spruce branches.

His and hers snowshoes

Most of the area along Schooner Head Road slopes steeply upward from the road, and there don’t seem to be any trails, so we drove along until it evened out a bit, then strapped on our gear and went off-roading toward the coast through a beautiful grove of young oak trees. There wasn’t much undergrowth, and I’ll bet it’s a gorgeous hiking area in the spring. It would have taken about ten minutes of brisk hiking, except I’m a photographer so everything takes me twice as long. It’s an old family joke that everyone else hikes up the mountain but I do wind sprints because I’m constantly saying, “Wow, look at the lichen on that tree! You go ahead, I’ll catch up.” And then I have to run uphill after everybody. 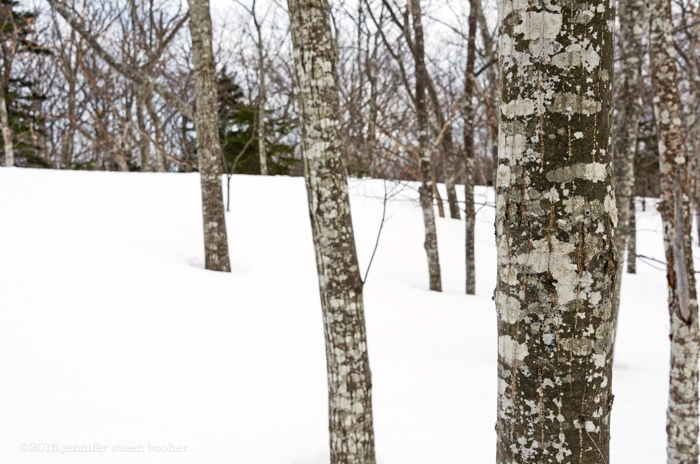 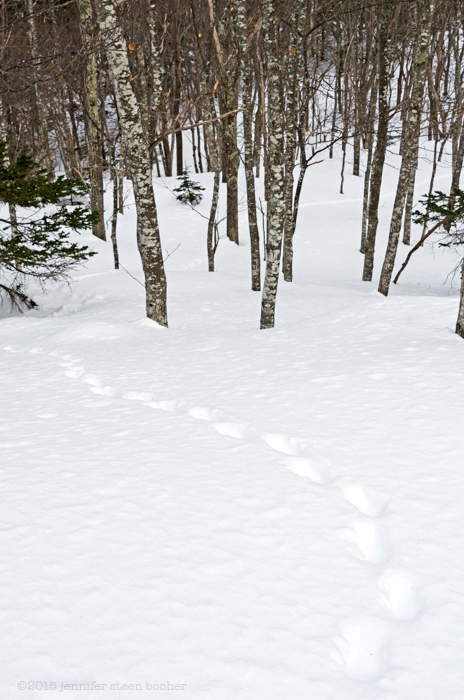 We were looking for the sloping ravine I’d spotted on the last walk, hoping it might be another way down to the sea cave I’ve been obsessing over. We found it, and in the summer it might be possible to scramble down, but right now the lowest portion is a waterfall of ice. Pretty, but I’m not quite ready to learn ice-climbing, so we kept going out onto the little point you can see on the map. 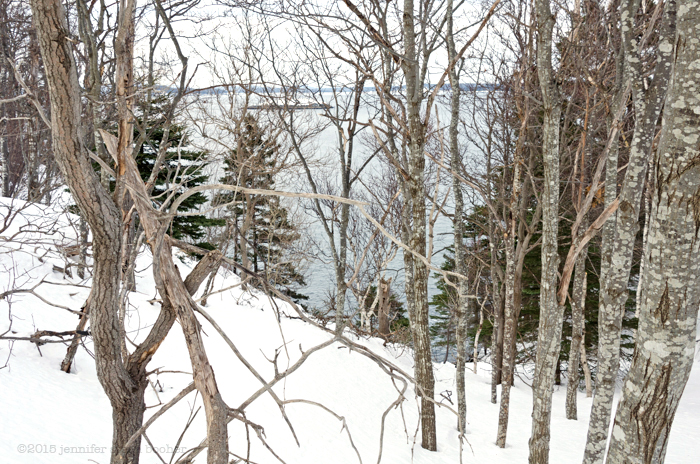 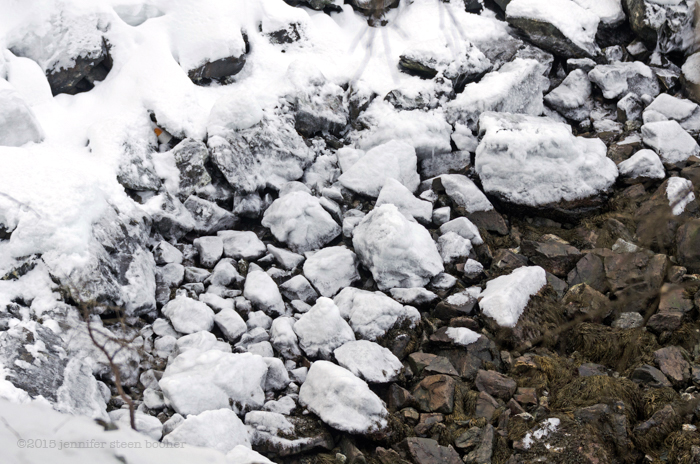 Looking back from the point we had a clear view of the cave (the photo at the beginning of this post gives a better idea of how big it is):

This was about an hour after dead low tide, so I’m not sure I’ll be able to get in without wading, but you know I am going to try! In about two weeks, as we head into the new moon, the tides will be at their lowest point, and I’m going to give that cave another shot. I don’t know what it is, there’s just something about caves that makes me feel like a kid on Christmas morning. Anything could be inside! I’m hoping for anemones and starfish, but I’d settle for pirate treasure. 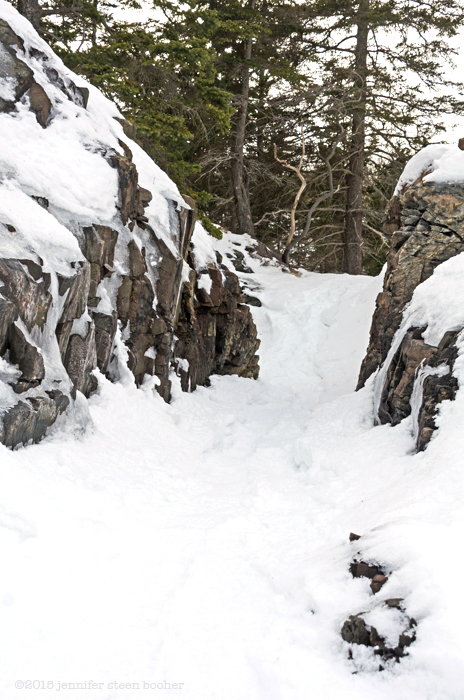 There’s a narrow passage through the rocks at the end of the point which looks like it would be a good access point to the shore when the ice melts. There were also some fabulously weathered boulders. I thought this one looked like a rabbit (our rabbits have short ears): 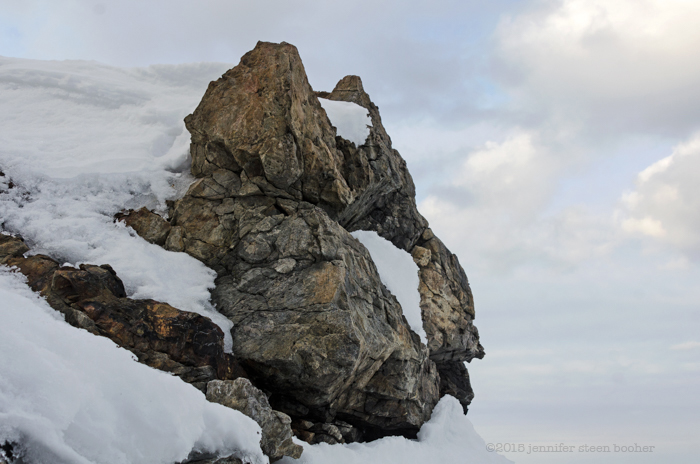 The house in the distance is on Schooner Head, which is beginning to feel like the hill from Through the Looking Glass, the one Alice could never reach: 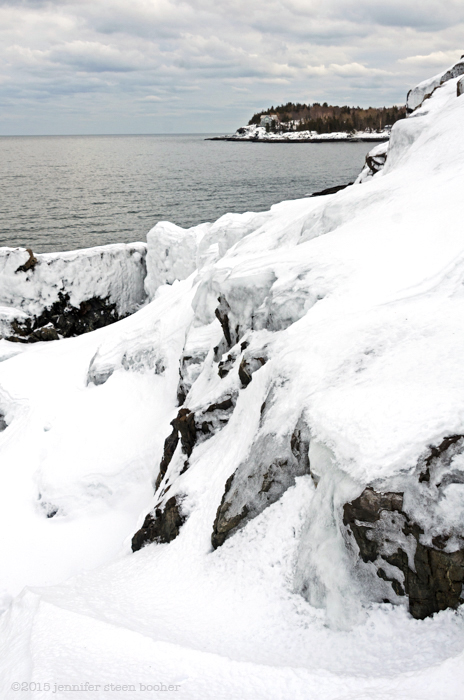 And this is looking back toward Sols Cliff. The mini-island in the center of the photo is just off of High Seas: 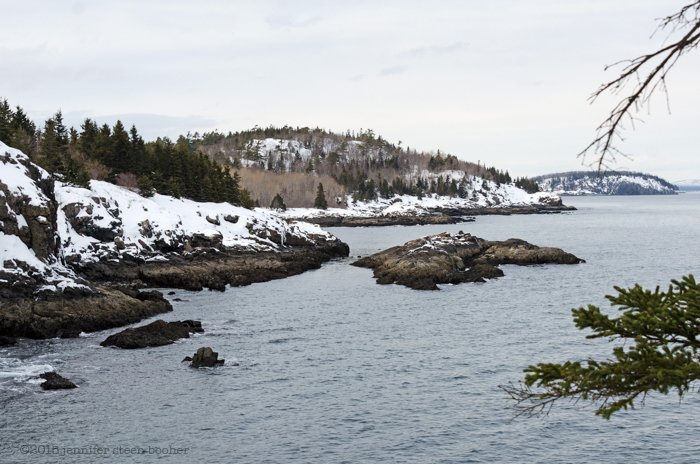 I’m heading over to the Bar Harbor Historical Society this week to research the area; can’t wait to see what cool stuff I can dig up there!