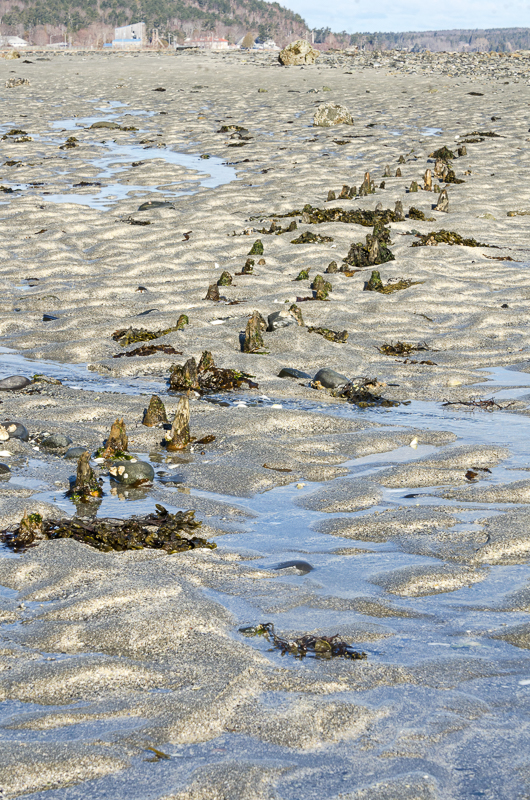 Years and years ago – before I became a photographer, before I started either the Beachcombing series or the Coast Walk, even before I got curious about how the stripes get into beach stones – I spent a lot of my beachcombing time at the Bar. Once, on a bitterly cold winter day after a big storm, I stumbled across a line of old posts. 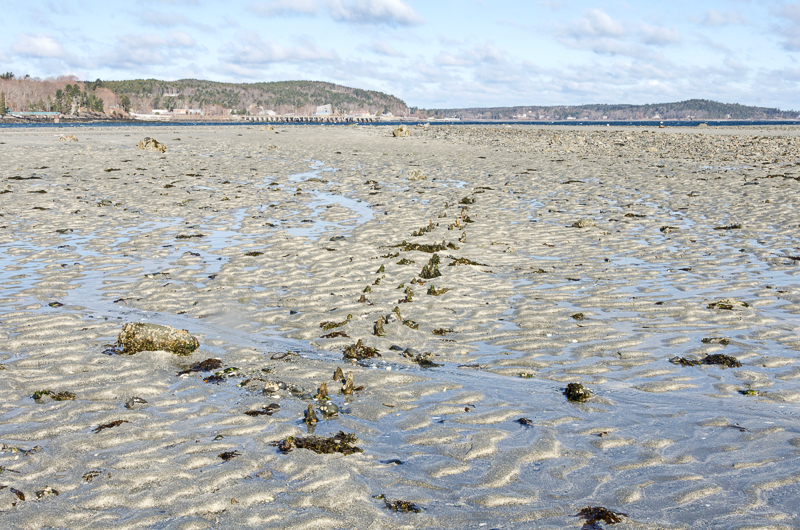 I stared at them for a long time – they were too far from either the big island or the little island to have been part of a dock, and they were too regularly placed to be debris. They were obviously not part of a shipwreck. What the heck? It remained a mystery to me for years. Then Facebook was invented, and the Bar Harbor Historical Society posted this photo: 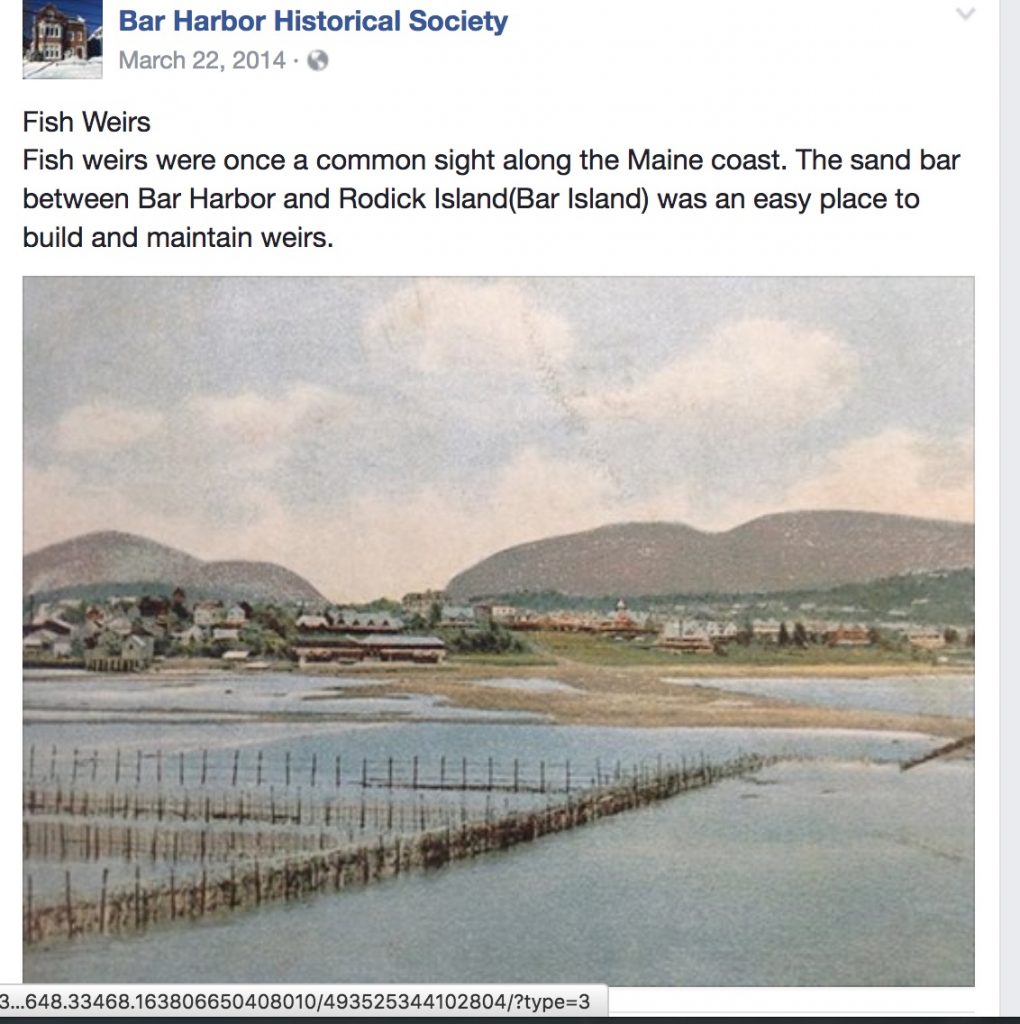 And all was made clear. It’s crazy that I forgot to mention this on Coast Walk 1, because this was one of those moments that added up into the idea that became the Coast Walk! But better late than never, right?

For those of us who are not familiar with them, let’s start with the basics – what’s a weir? A fishing weir is a structure meant to trap or channel fish. It’s an ancient technique found all over the world. People use stone walls, baskets, woven wattle fences – whatever materials are common. Here in the northeast, you still sometimes see posts with nets strung between them.  The tide rises, the fish swim in the deeper water, then as the tide recedes, the current pulls the fish into the weir. Some weirs are constructed with a small opening so it’s hard for fish to find their way out. I believe the Rodick weir had an opening that could be closed when the weir was full.

This 1901 description of the weir by a naturalist makes me so jealous: 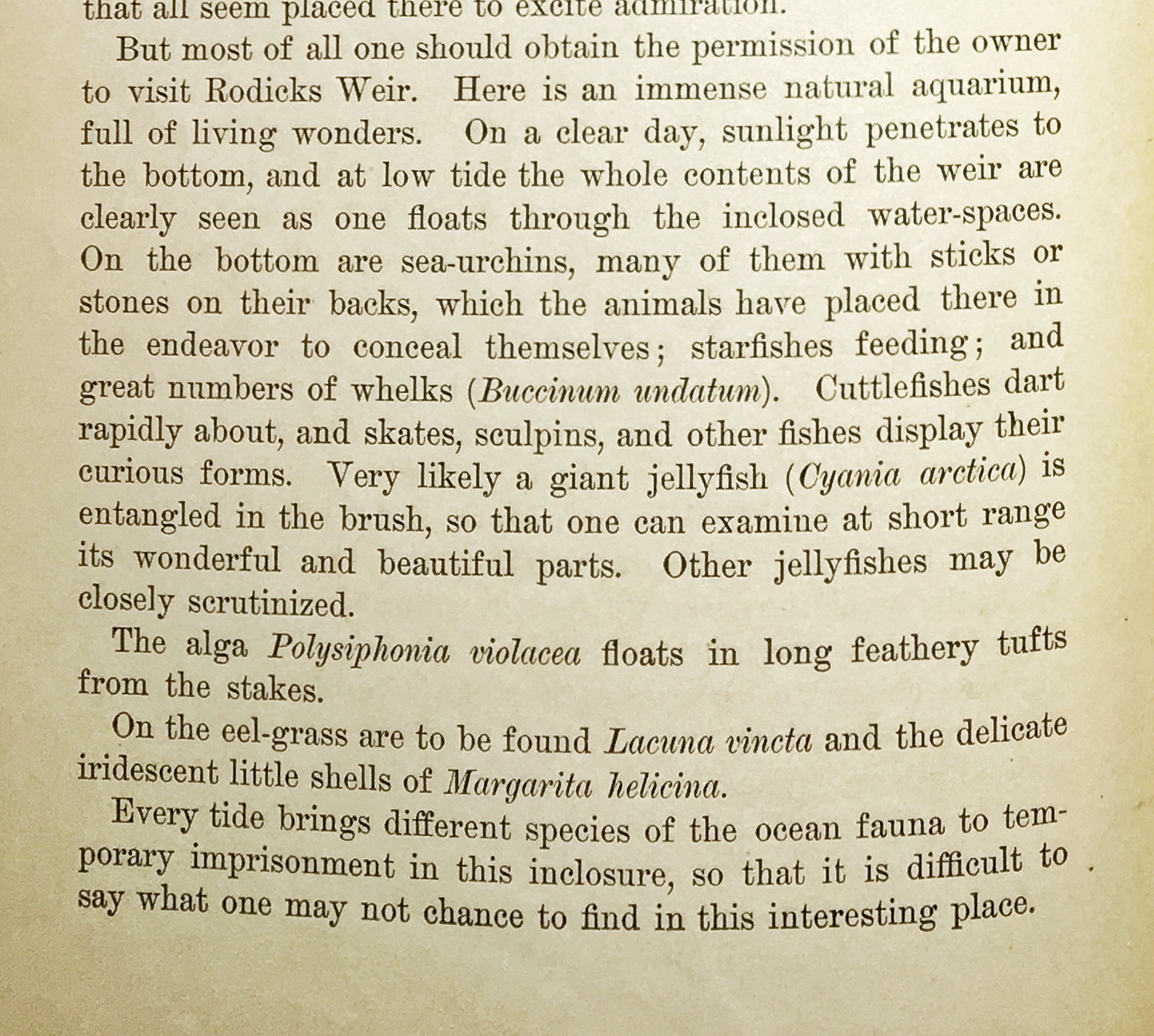 It sounds like the world’s most amazing tidepool! One thing I don’t understand is that now at low tide that area is dry (as you can see in my photos), which makes me wonder if we’re both talking about the same weir. Maybe Rodick had another one a little farther out? Another peculiarity is that while most of the species she mentions are still here, I’ve never seen Margarita helicina (now called Margarites helicinus.) It looks a bit like a Smooth Periwinkle, so maybe I have seen them and didn’t realize it? It’s hard to learn species ID through the internet. Anyway, I’d never heard of it before reading this, so you know I’ll be keeping a sharp eye out now.

One of the reasons I was so struck by finding out this had been a herring weir is that, to the best of my knowledge, there aren’t any inshore herring now. My husband remembers a large shoal of them coming in to the town beach when he was a kid (1970s), but that was a rare thing, and doesn’t seem to have happened since. I highly recommend this essay on cod-fishing around the island and its effect on other species, including herring:  “From Wealth to Poverty: The Rise and Fall of Cod around Mount Desert Island.”  Herring was used as bait in the cod industry, as it is now in the lobster industry, and the scale of the depletion the authors describe is hard to imagine. “One large weir was on Rodick’s Island (now Bar Island) bordering Bar Harbor. In 1884 the Maine Mining and Industrial Journal reported “A big haul of herring—some 3,000 to 5,000 bushels [roughly 210,000 to 350,000 pounds]— was made this week in the weir at Rodick’s Island.” And the Journal announced the next year that “Herring have been quite plentiful in Frenchman’s Bay recently. One day last week 1,000 bushels [70,000 pounds] of the fish were taken in the Rodick weir at Bar Harbor in one tide.” This was one of many weirs in the area; at this time, Penobscot Bay supported 183 of them.”  Can you imagine 70,000 pounds of fish being taken between Bar Harbor and Bar Island? 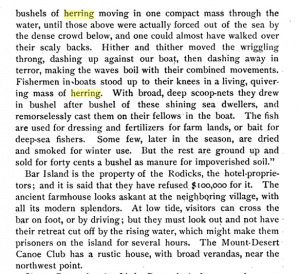 Some more photos of the Rodick weirs: 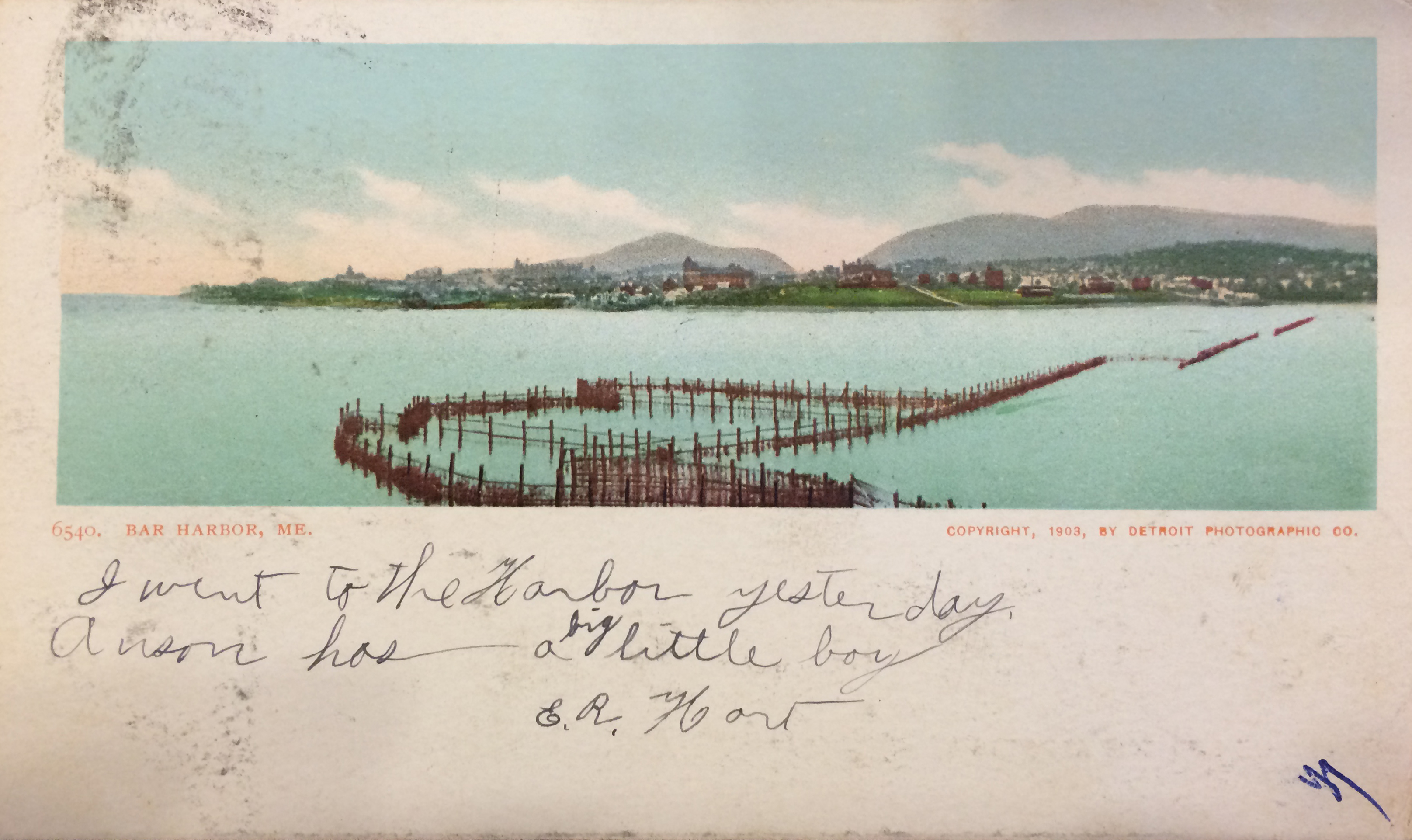 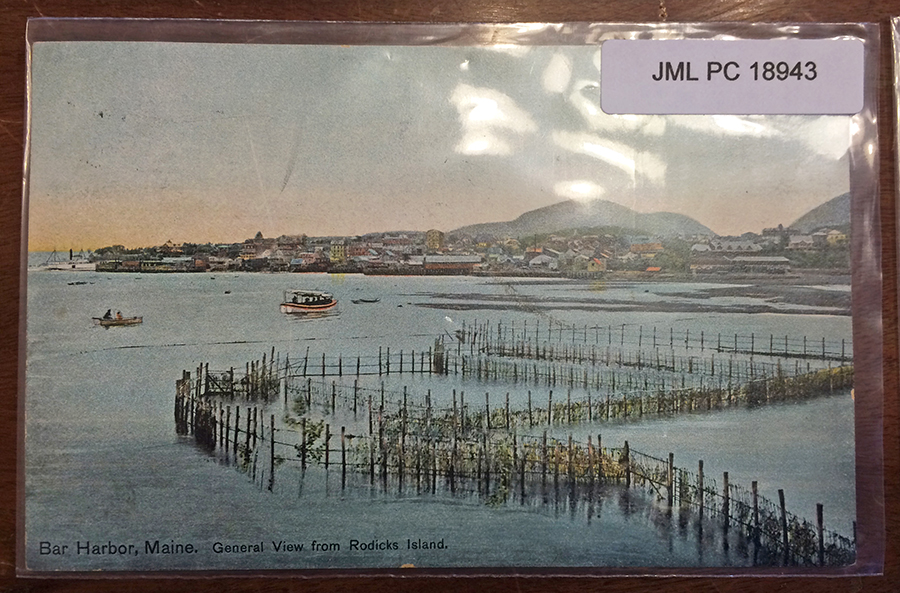 And more photos of the remains of the weir: 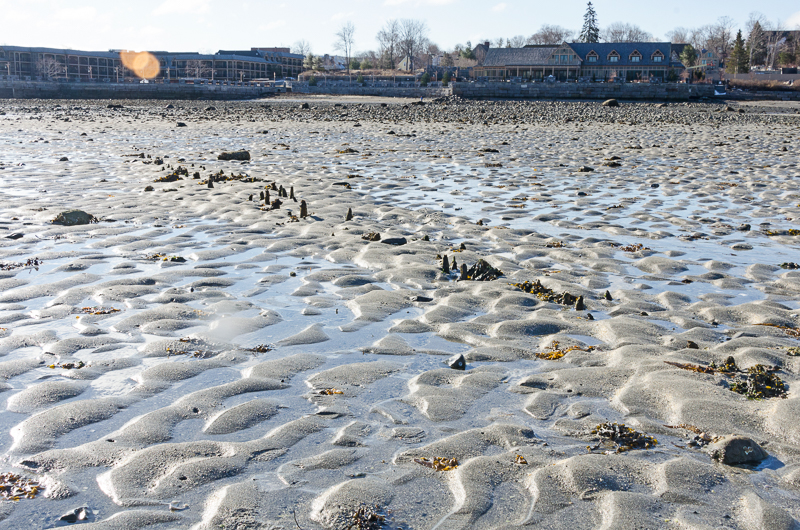 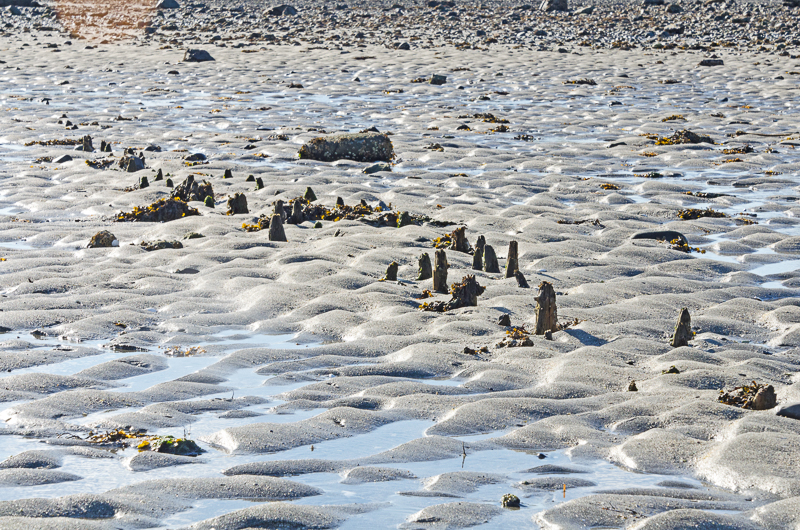 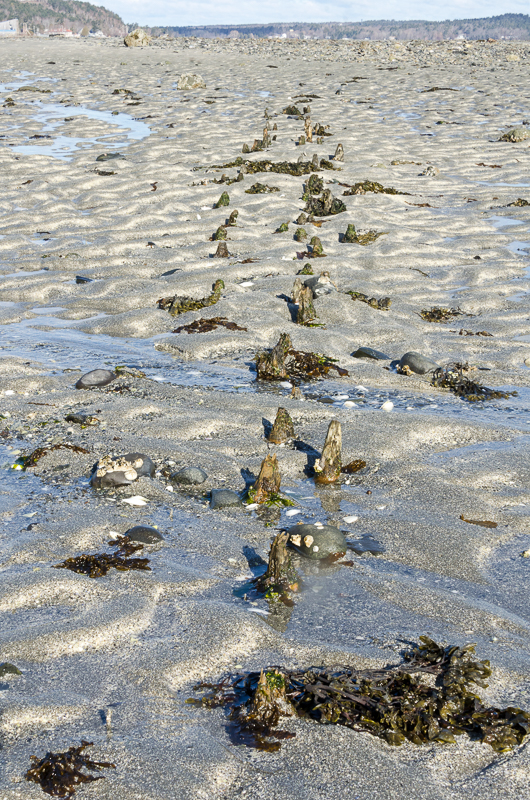 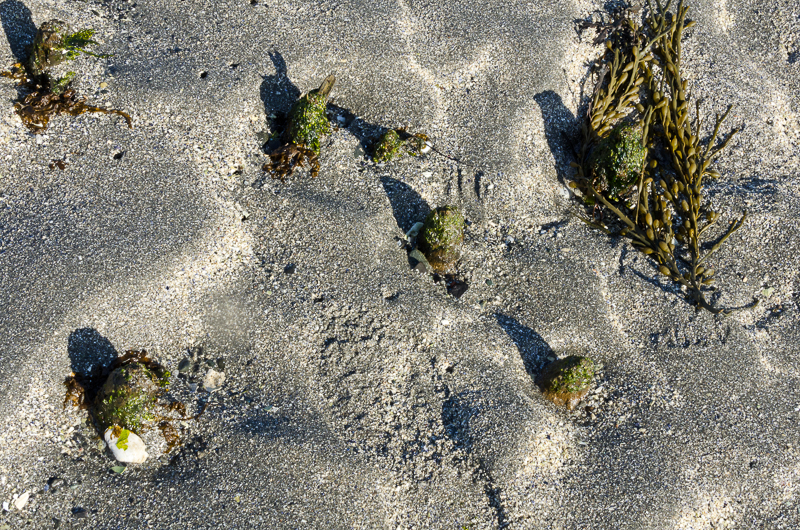 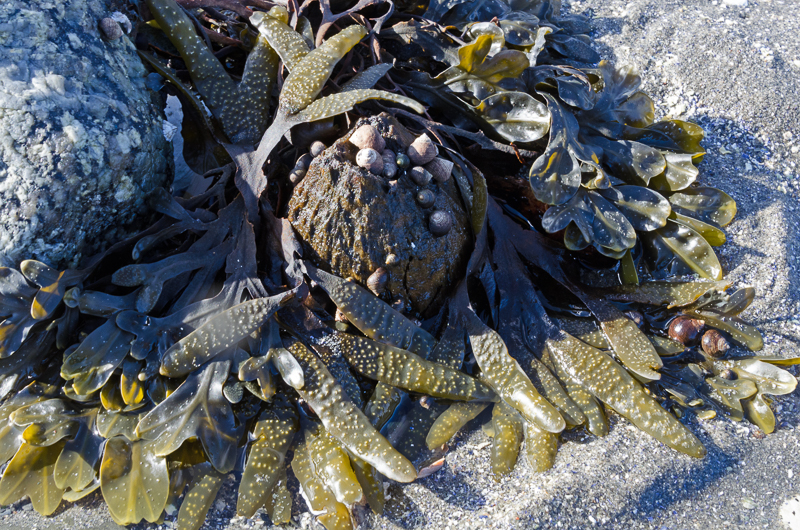 In other news, while I’ve been stalled waiting for permissions for the next stretch of the Coast Walk, I’ve been busy in the studio.

Here’s the beginning of a new series on Healthcare: 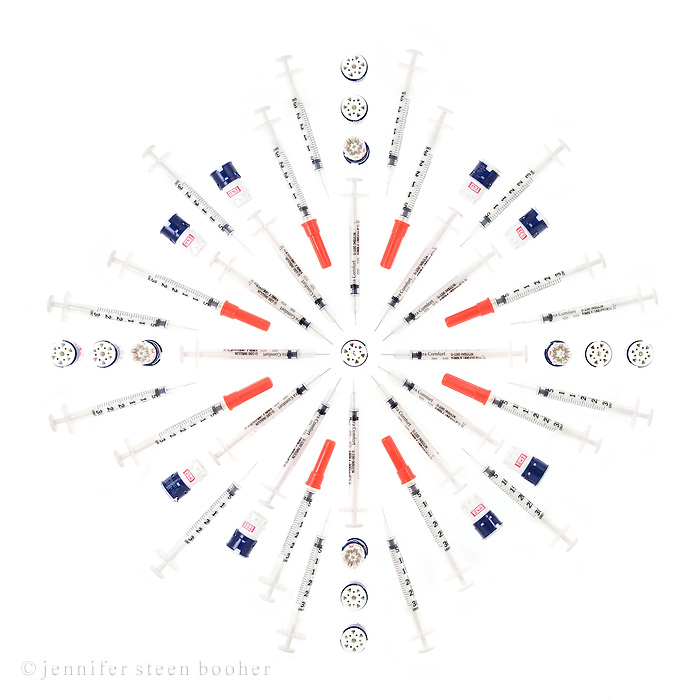 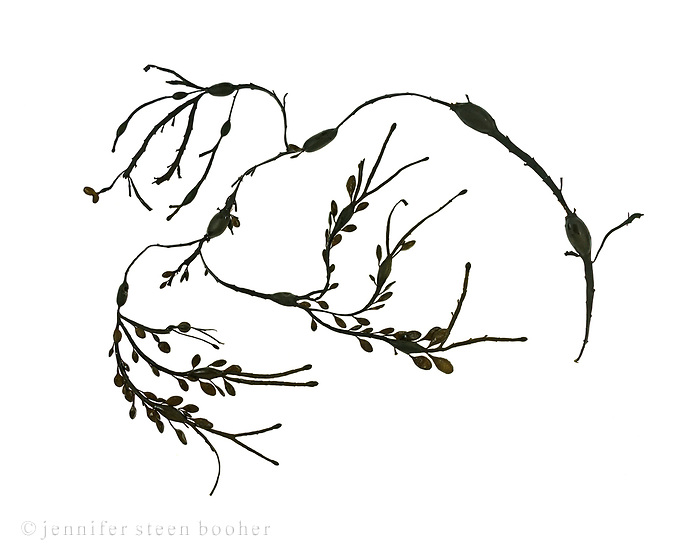 Arnold, Augusta Foote. The Sea-Beach at Ebb-Tide. NY, The Century Co., 1901. (the photo is from my personal copy but I’ve provided a link to an online text.)

Springuel, Natalie, Leavenworth, Bill, and  Alexander,Karen. “From Wealth to Poverty: The Rise and Fall of Cod around Mount Desert Island.” Chebacco, vol.XVI, 2015, pp.66-91.

One thought on “Addenda: the Rodick herring weirs (Coast Walk 1)”